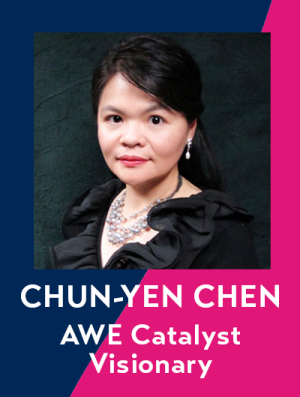 Chun-Yen Chen is the Executive Director of the Asian Pacific Community Fund. She directs operations and grantmaking for the organization. Previously as project-based Development Director, she cultivated major donors to grow its Donor-Advised Fund as well as the scholarship program. Chen has over 20 years of professional working experience in non-profit executive management and fund development, state government budgetary analysis, and academic faculty fields. She will be honored as the AWE Catalyst Visionary for her extraordinary leadership and  career-long investment in the AAPI community.

Chen grew up in Taipei, Taiwan. After received her bachelor’s degree in Political Science from National Taiwan University, she came to U.S. and received her master’s degree as well as doctoral candidacy in Public Administration from Rockefeller College of Public Affairs & Policy at the State University of New York Albany.

Prior to her nonprofit management career in California, she taught MPA courses at Marist College as an Adjunct Faculty and worked as a Senior Budget Examiner for the New York State – Division of the Budget, the primary fiscal advisor to New York’s Governor.

As an active volunteer, Chen has served as a recreation commissioner for the City of San Marino and as a board member of the Chinese Club of San Marino, Taiwan Center Foundation of Greater Los Angeles, and National Taiwan University Alumni Association of Southern California. In 2010, she received “Taiwan’s Top Ten Outstanding Young Person – under Public Administration Category” and received special recognition from the President of Taiwan.