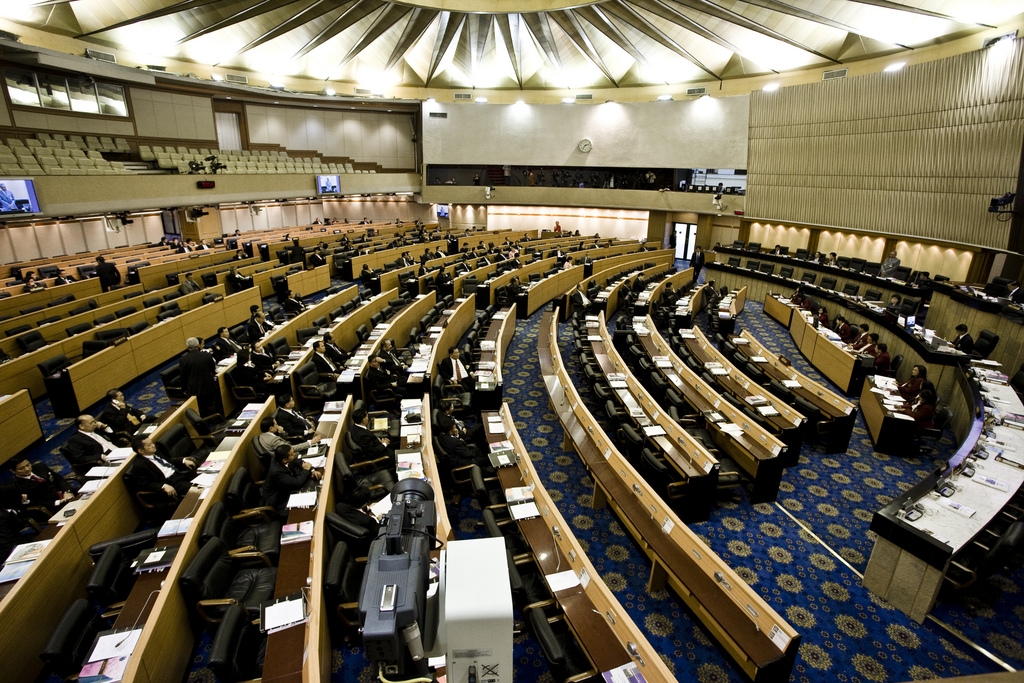 While both the Democrat and Bhumajaithai parties have shifted significantly from their pre-election stance to oppose military-authoritarian rule, other parties are still remaining in opposition. The Pheu Thai Party, despite having the highest number of seats in the lower house and its members likely to be the prime minister’s most vocal critics, have “lost some luster with the cut and thrust of politics”, writes Dr. Pongsudhirak, and that internal realignments or split-offs within the party will determine its future, rather than external factors. And while the Future Forward Party — which has seen unprecedented political growth in Thailand in just over a year — can take up seats on important committees such as budget, finance and banking, and foreign affairs, the party’s intense criticism of the junta has made its leaders a target for persecution.

Dr. Pongsudhirak identifies Thailand’s former police general, Sereepisuth Temeeyaves, and his new Seri Ruam Thai Party as being the most effective opposition post-election. Temeeyayes’ legally-backed remarks and statements, in addition to his royalist credentials dating back to Thailand’s anti-communist years, makes him stand out from the rest and will likely make him a “key barometer” in Thai politics.

Following is the full text of the op-ed published by the Bangkok Post on June 14, 2019.

Almost three months after the March 24 poll, Thailand has barely managed to come up with a new government leader, who remains Gen Prayut Chan-o-cha, but a cabinet has still yet to be announced owing to haggling and bargaining over portfolios.

While the governing coalition appears fractious with more than a dozen parties, the seven-member coalition looks solid and cohesive in their aim. As the new government begins, political parties and politicians on both sides are having to make a transition to being in government or opposition. Some are doing it better than others.

Perhaps the two parties and attendant MPs that have attracted most attention are the Democrat and Bhumjaithai parties. In their pre-election days, both pledged not to support the continuation of military-authoritarian rule. Democrat leaders wavered and expressed timid accommodation for the pro-military Palang Pracharath Party but not Gen Prayut, its de facto leader. Bhumjaithai's leadership ostensibly sounded pro-democracy before the election by criticising the junta-appointed senate for having a powerful parliamentary role in selecting the prime minister.

After poll results were done and dusted, both parties reneged on what they stood for before the poll. Accountability for the betrayal of their stands has gone digital in an unprecedented way. With social media's proliferation, what politicians say is now being quoted and kept for subsequent airing. YouTube records are available to show what the leaders of the Democrat and Bhumjaithai said prior to the election, which is contrary to their actions today.

This is a kind of accountability not seen previously in Thai politics. Naturally, both parties have grown thicker skins in the process to shrug off accountability and responsibility. But the verdict on their performance in the next poll will be worth watching. At the Democrat Party, there is at least an internal party shakeup as a result of joining the Palang Pracharath-led government. At Bhumjaithai, it seems par for the course. Having been out of cabinet for eight years, both parties appear eager for cabinet action at the cost of principles.

For Palang Pracharath, its core leaders are back in cabinet, along with Gen Prayut. The addition will be the veteran politicians from rural patronage networks whom the junta enticed to join their party. So the first post-election Prayut cabinet may ironically resemble that of Thaksin Shinawatra from some 15 years ago, although the Prayut side is supposed to have got rid of the Thaksin camp because of corruption and abuse of power.

The opposition is more interesting to assess. The Thaksin-aligned Pheu Thai Party is now the first largest winning party in recent memory not to be able to form a government. Largest winning parties have formed the foundation of governments dating to the mid-1970s. By voting without exception for Gen Prayut to be prime minister, the 250-member junta-appointed senate has shown itself to be the largest political party in current Thai politics.

Pheu Thai is likely to be vocal and effective as the core of the opposition but it appears to have lost some lustre with the cut and thrust of politics, including the dissolution of its sister party, Thai Raksa Chart, and perhaps the withdrawal of Thaksin's royal decorations. While still the largest in the elected lower house, Pheu Thai is a shadow of its former juggernaut self. Whether it remains as is or undergoes internal realignments and potential split-offs will be consequential for party politics going forward.

The Future Forward Party, on the other hand, appears in an unnecessary hurry. Thailand has never seen the likes of this party, which has catapulted itself from nowhere to be the third-largest banner after the election. It basically stands against everything the junta stands for, from military conscription and the defence budget to the number of generals. Above all, Future Forward wants to undo much of what the May 22 coup has wrought over the past five years, particularly revising the pro-military 2017 constitution wholesale.

But Future Forward has made a misguided post-election transition. By banging on against the junta day in and day out, Future Forward's main leadership figures have become a target for persecution.

Unsurprisingly, its leaders are facing a range of charges from sedition and electoral infractions to potential lese majeste. The party's leaders should be biding their time, consolidating and broadening their constituent bases, and training themselves and their MPs for the nitty-gritty work of being people's representatives in parliament.

For example, the lower house will form a host of committees to look after policies and governance. Future Forward and other opposition members can aim for crucial committees, such as budget, finance and banking, defence, and foreign affairs. As pledged before the election, Future Forward can also scrutinise graft allegations and the role of large conglomerates that have taken the lion's share of government concessions and contracts, emphasising the role of small- and medium-enterprises. The party can also speak up and defend human rights and basic freedoms where they are being trampled on the most.

There is plenty of work to do in parliament for the electorate that does not have to go directly after the ruling generals on a daily basis and become lighting rods along the way. It is as if Future Forward's leadership is on a crusade for their base and not the wider electorate. This is a phenomenon that can be called "fan-clubbing", engaging in acts that satisfy mainly partisan crowds and followers. Future Forward evidently has enough political kilometres to last for years but the party's leadership risks being extinguished in weeks.

Perhaps the best post-election performer is Pol Gen Sereepisuth Temeeyaves, the leader of the new 10-MP Seri Ruam Thai Party. The ex-police chief-turned politician takes the junta to task just as much as Future Forward, but his words and deeds are backed every step of the way by constitutional law and legal provisions. His initial remarks in parliament were composed and professional, sticking to the law and his own principles at the same time. Speaking truth to power, he has publicly mentioned that outsiders have tried to "buy" his party's support to the tune of 300 million baht. Yet no one has sued him, and the Election Commission has not launched an investigation.

Most important, Pol Gen Sereepisuth is more equipped than other opposition politicians to take the government to task because of his staunch royalist credentials, demonstrated on the battlefield back in Thailand's anti-communist years.

For those who want to know where Thai politics has been and where it is going, the former police chief will likely be a key barometer.

Read the op-ed on the publisher's site.