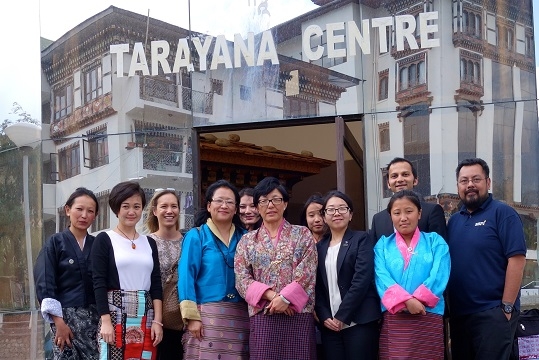 Continuing a commitment to public service, select Asia 21 Young Leaders Class of 2013 alumni visited Bhutan, delivering insights and impact on public service activities in the country, in May 2014.

The trip, a public service initiative of the Class of 2013, aimed to strengthen the Asia 21 network through collaboration, and undertake a series of consulting workshops done by the Class and their beneficiaries Tarayana Foundation and READ Bhutan.

Following a series of consulting workshops, both organizations and the Class of 2013–referred to as Ubuntu–alumni were able to create a roadmap to design and implement a monitoring and evaluation (M&E) system for the project on nettle weaving. The system’s advisory board is composed of Ubuntu’s class members, and the University of North Carolina at Chapel Hill as university partner.

Tarayana Foundation well received a feedback on their website design and the potential for the use of social media to strengthen its online presence. Meanwhile, Ibrahim 'Ibba' Rasul Bernardo’s Sari software presented how mobile technology can support the foundation’s operations.

READ Bhutan was able to identify different funding models, funder requirements, and ideas for potential fundraising mechanisms. They also introduced Ewa Wojkowska’s organization, Kopernik, and planned to collaborate with them on technology projects which include a social enterprise to pilot the sale of hand cranked corn shellers for maize farmers.

Subsequently, the group explored the possibility of deploying Sari to Tarayana. Moreover, they were also asked to serve as brand ambassadors for READ Bhutan to develop the organization’s presence online. They will also be tapping the whole of the Ubuntu class and the larger Asia 21 network to find potential funding sources.

Eventually, the young leaders were able to successfully serve their duty in enlightening the Bhutanese people, as well as learning from them through cultural immersion. They have forged stronger ties and camaraderie with the Bhutanese youths, showing that the Asia 21 Initiative is beyond barriers, reaching out together to achieve sustainable human development.