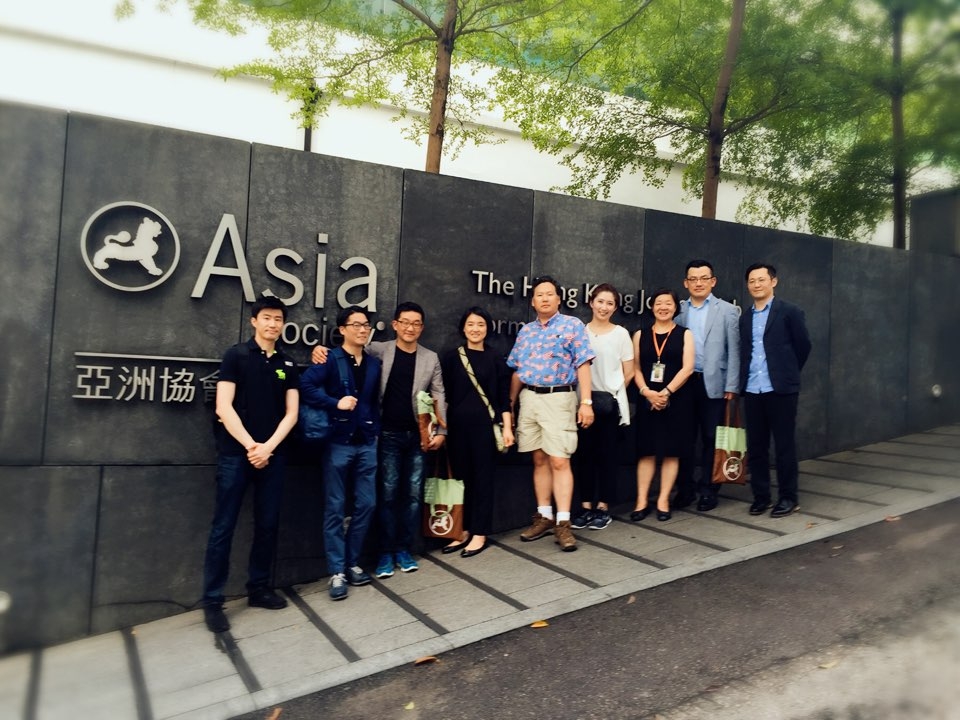 The Asia 21 Korea Chapter (K21) aims to be a high-profile organization that identifies and pools together talented, young Korean leaders for global exposure and interface. Through the design and execution of programs that foster leadership and contribute to civil society, members of the K21 will strive to be a diverse platform for international and national dialogues. In doing so, the Korea Chapter stands as an active gateway for engagement into the cultural, political, business, education, social, and technological issues that affect Korea, the Asia Pacific, and its partners worldwide.

Jimmy CHEY is the President of MIGHT & MAIN corp., a major logistics company covering transportation, distribution, and the defense industry. Previously, Mr. CHEY was Vice President of SK Networks before founding MIGHT & MAIN corp. in 2002. He received his bachelor's degree in Business Management from Korea University. He has also received the United States Force Korea Good Neighbor award, the UDT/SEAL Commander of Naval Special Warfare Brigade award, and, in 2006, received a special award from the Chief of Seodaemoon Police Station.

Hyun-jin Cho is the executive director of strategic planning and external affairs at Kookmin University. She previously served as a news team director of Arirang TV, where she created the new weekly program ‘Diplomacy Lounge’, Korea’s first foreign affairs and diplomacy-oriented program. Before working for Arirang TV, she worked for Invest KOREA, handling Korea’s activities to attract foreign direct investment and promoting Korea as a destination for global businesses. For 10 years, Ms. Cho worked for YTN, where she received the Outstanding Reporter Award on 5 occasions as well as the Creative Producer Award. Ms. Cho received an M.A. in business administration from Yonsei University and a B.A. in economics from Clark University in the United States.

Hyun-sang Cho is the Executive Vice President of Hyosung Group. He also serves as the President of Hyosung’s Industrial Materials Performance Group, CMO of Chemicals Performance Group, and Executive Vice President of the Corporate Strategy Center. The Industrial Materials Performance Group manages industrial products for the automotive, electronics, and energy sectors. Having joined Hyosung Group in 2000, he was responsible for the Group’s strategy and management at the Corporate Strategy Center prior to being appointed to his current positions in 2014. Educated at Yonsei University and Brown University, Mr. Cho previously worked at Bain & Company’s Seoul and Tokyo offices as a consultant, and at NTT Communications in Japan, responsible for corporate sales. Cho was elected as World Economic Forum’s Young Global Leader (YGL) in 2007. He was chosen as a member of the “Asian Young Global Leader’s Forum” jointly by the foreign ministries of Korea, Japan and China. In the corporate social responsibility (CSR) realm, he established a program called “Table for Two”, with other young global leaders, which provides food for starving kids in poor countries.

Ryan (Jungwook) Hong is Chairman and CEO of Herald Media, a leading media group in Korea. His holding company, Kalia Inc., is the largest shareholder of Herald Media. He is the publisher of Herald Media’s publications, including The Korea Herald, the nation’s largest English newspaper, and The Herald Business, a leading Korean business and entertainment daily. Mr. Hong is on the boards of all Herald Media’s subsidiaries and serves on the boards of the Korea Newspaper Association, the International Press Institute Korea Committee, and the Korea Press Ethics Commission. Moreover, Mr. Hong is a board director of the Korean-American Association and a member of the Policy Advisory Committee of Asia Society. He is also an avid patron of arts, serving on the Operating Advisory Committee of the National Museum of Korea, the Operating Committee of the Seoul National University Museum of Art, and the Advisory Committee of the Gloria Opera Company. Previously, he worked as an investment banker and lawyer in the United States. Mr. Hong was selected as a Young Global Leader by the World Economic Forum in 2005 and an Asia 21 Fellow by the Asia Society in 2006. He has published many articles and books, including Seven Acts Seven Scenes, an autobiography that has sold over 1.3 million copies to date. Mr. Hong received his B.A. from Harvard University and J.D. from Stanford University. He also studied at Peking University in China and Seoul National University in Korea. In 2005, Mr. Hong received an honorary doctorate in politics from Yongin University in Korea.

Lt. Colonel Jung Hae Il was born in Seoul on September 3rd, 1967. After Seoul High School, he completed four years in the Korea Military Academy to become a career officer and was commissioned as ROK Army Second Lieutenant in 1990. He served as the Company Commander and Regimental S-3 Officer in the 11th Division, ROKA, before being appointed as aide-de-camp to the Chairman of Joint Chiefs of Staff; S-3 OIC, 23rd Regiment, 3rd Infantry Division; Chief of Long-term Policy Planning Department, Ministry of Defense, and Chief of Policy Co-operation Affairs Department, Office of the Minister of Defense. He performed a wide variety of duties in defense policy planning, parliamentary negotiations, and orchestrating policy between the government and the Ministry of Defense. He is currently serving as the Commander of United Nations Command Security Battalion - Joint Security Area(UNCSB - JSA), the foremost unit in the Republic of Korea, a key in preserving the Armistice Agreement between South and North Korea. Lt. Colonel Jung completed his Master's Degree in International Relations in Australia; he researched Military Affairs in JCS College, USA and the National Defense College, Netherlands. He completed his Ph.D in Political Science.

Eddie Suk-hyun Kang received his bachelor’s degree in fine arts from Rhode Island School of Design in 2003. He has had over 5 solo exhibitions, and has participated in over 8 group exhibitions in major cities worldwide, such as Seoul, Taipei, Shanghai, Tokyo, Hong Kong, New York, and Venice. Eddie has always been a popular artist among corporate and international brands, he previously worked with Amore Pacific, Paul Smith, Fuji Bike, and many more. Eddie’s works are often colorful and dreamy, philosophical stories which he creates based on life's reflections. Growing up in a city, Eddie learned that city people have mixed feelings towards the competitive and fast-paced environment, and created a series of works to express his desire to escape, his courage to dream, and his ability to think beyond. He uses a warm colour palette and paints from his dreams and childhood memories, capturing varying subjects from teddy bears to forests and layering them with different patterns for a more vivid presentation. Kang is the chair of the Asia 21 Korea Chapter.

Bora Kim is the Chief Executive Officer of Bon Vivant. Previously, she was self-employed as a design research consultant. Working for Samsung as a Design Researcher and Consultant, Kim analyzed products and design trends and performed international field research to enhance the value of products. She also researched the ethnographic, design, art and cultural aspects of foreign countries in order to develop specially-tailored product opportunities, business concepts, and product platforms. Kim began working for Samsung in 2003 as an Assistant Manager of Marketing Communications, where she planned and executed international and domestic exhibitions and trade fairs. Before entering Samsung, Kim was a visiting artist and lecturer at several art colleges in the United States. Her artwork featured in 4 solo and 15 group exhibitions in the United States as well as Korea and, during her studies, she was awarded 3 fellowships and 7 scholarships.

Karoline Jina Kim is curator and manager of Hans Holdings and will begin a Master’s program in Art Business at Sotheby’s Institute in New York in the Fall of 2017. Kim became curator and manager at Hans Holdings in July of 2016 and previously was marketing director of GlooKids, a children’s wear start-up in Seattle. She initially entered the art gallery industry as an intern for Gallery HYUNDAI’s production department. Kim completed a Master’s degree in Early Childhood Education from Chung Ang University in 2014 and received a Bachelor’s degree in Sociology from New York University, College of Art and Science in 2007.

Sean Sae-yeon Kim is Chief Executive Officer of W Investment & Finance Co., Limited. Previously, Kim was a Partner at the LIAN Consulting Group, which he founded in 2006. As a Certified Public Accountant, he led many merger and acquisition projects while providing advisory services for listed companies to expand their business portfolios. Kim completed a Master’s degree in Information Systems at Drexel University in Pennsylvania, where he served as president of the Drexel IST Korean Student Association. He previously received an Master’s degree in Business Administration from Seoul National University, where he founded the A-Jung Accounting Club for researching and discussing accounting, taxes, and finance issues. Kim also received his B.A. in Business Administration from Seoul National University.

Je-Wook Lee is President and Publisher of the Jeonnam Ilbo, a regional daily newspaper in the Jeonnam Province of South Korea. At its helm, he employs forward-looking and innovative approaches to publishing, while also emphasizing the company’s social responsibilities in the Jeonnam region. Since 2015, Je-wook has used his newspaper to initiate the Gong Project, a public awareness campaign aimed at encouraging public participation in tackling social issues in Korea and shaping policies to prevent disasters like the Sewol Ferry Accident. The Gong Project also provides like-minded individuals from diverse backgrounds the opportunity to contribute their expertise for the campaign. He has also been elected to three consecutive terms as vice president of Korea Digital News Association since 2014. Je-wook is also the Chief Executive Officer of Daejoo Machinery, where he previously served as vice president in 2007. He holds a degree in international relations from Brown University.

Mark Tetto is Partner at TCK, in charge of investor relations and investment strategies review. Mark brings 10 years of finance experience spanning investment banking, corporate M&A, private equity and venture capital investing. Prior to TCK, Mark was at Samsung Electronics’ corporate M&A team, where he spent four years successfully acquiring companies and building the firm’s M&A practice. Previously, Mark was with Morgan Stanley, working in New York and London on M&A and corporate finance, raising funding for clients in excess of $1Bn. Mark holds a BA in Chemistry from Princeton University, and an MBA from The Wharton School, with a concentration in Finance.

Ilyoung Yun is the Business Development Director of People Fund. Previously, he was a senior analyst for BRV Lotus and led business development for Visionscape, a hardware project management company in Menlo Park, California. Yun managed the investment department of Youngan, a family-owned angel investment company in Seoul, where he executed acquisition of stock and devised strategic recommendations for investing in the Korean market. Before working for Youngan, he was a consultant for Deloitte Consulting. Yun completed a Master’s of Business Administration at Northwestern University’s Kellogg School of Management, where he was Director of both the Kellogg Family Enterprise Club and the Kellogg Photography Club. Yun received his B.A. in Economics from Emory University, concentrating in Financial Economics.

Sung-joon Jung is the Chief Director of the Institute of Polarization Studies (IPS).