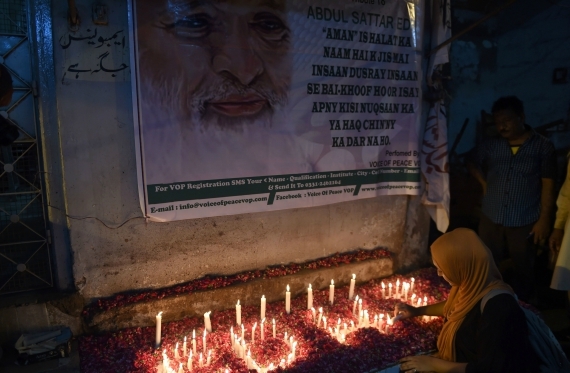 Words fail me as I attempt to pen an epitaph for one of the greatest Pakistanis who ever lived: the humanist, the philanthropist, the messiah — Abdul Sattar Edhi.

Dubbed the “Angel of Mercy,” the iconic founder of the Edhi Foundation breathed his last in the late hours of July 8, 2016. He was 88 at the time. For over six decades and counting, under his dynamic patronage, this incredible non-profit social welfare program has provided 24-hour emergency assistance, shelter for the destitute, free medical care, maternity and adoption services, and drug rehabilitation across Pakistan. Apart from boasting the world’s largest ambulance service, the outfit also focuses on education, healthcare, services for orphans and the handicapped, and rescue and relief operations.

Saturday, July 9, 2016. The day Pakistan had dreaded — the time to bid adieu to Mr. Edhi — had arrived. The air was somber. I walked past dozens of OB vans and hordes of policemen to arrive at one of the most familiar doorways in Karachi’s old city area of Mithadar. To my surprise it was bolted shut — it had never been before. But this was clearly no ordinary day. I made my way in, through the back entrance, past the living quarters. It appeared to be business as usual — lunch service for the orphans residing in the premises was underway, and daily mid-wife facilities were also in full swing.

I reached the ground floor of the building to find the usually buzzing office space transformed. There were no desks with staff tending to those in need. The sofa by the front entrance where the grand old gent once sat greeting visitors every evening was now empty, except for a sole occupant, Anwar Kazmi — Edhi’s long-time associate and trusted aide. The air was stiff with the fragrance of incense and fresh rose petals. Preparations were underway to bid a final farewell to the man whose passing, many say, has orphaned Pakistan. And just past noon, amid the sounds of wails and clicking cameras, the bolted door finally swung wide open. As I watched the casket carrying the mortal remains of Mr. Edhi being draped in the national flag and taken out of his home on the shoulders of his loved ones, I knew that Pakistan as a nation was poorer without him. Our guardian angel had left us forever.

We all knew Edhi sahab (as he was commonly referred to) was frail and ailing. The end appeared inevitable days ago. But were we as nation really prepared to deal with the aftermath of this giant’s passing? Not in the least, not one bit.

In Pakistan, for the longest time, the name Edhi has been synonymous with rescue, relief, and most importantly shelter. Abandoned children and adults, orphans and the unwanted always had (I pray, will continue to have) a home – religion, caste, creed, and ethnicity did not matter.

I vividly remember my conversation with Mr. Edhi, the evening before I flew with his wife to New Delhi to drop off young Geeta, late last year. The girl had inadvertently crossed the border into Pakistan from India over a decade ago and had been living with the Edhis since.

Flooded with photographs of families claiming to be hers, overcome with emotion, Geeta thought she recognized one as her own. Edhi sahab’s wisdom told him otherwise. Recalling multiple such attempts to reunite Geeta with her loved ones over the past 12 years, he bluntly told me that if her family hadn’t come forward yet, there was little or no chance they would now. He was quick to add, whether or not Geeta found her parents and siblings, she would always have a family and home in Karachi. His vision was beyond exemplary.

In the absence of what may be considered basic functioning of the state, it was Edhi, the one-man army and his extensive network of red-shirts, the foundation’s incredible volunteers or razaakaars who stepped in to sort things out — no matter how difficult it was, no matter how tough things got. Terrorist attacks, natural calamities, or national disasters, you name it: They were and are there.

The infrastructural strength of the Edhi Foundation remains unmatched. To think, after his death, Edhi sahab was carried out of the hospital by his own volunteers to an ambulance bearing his own name, to the morgue he had established to serve the city of Karachi before his burial in a village he had set up for those in need.

Even posthumously, Edhi remained true to the motto of his foundation: “Live and help live.” Having pledged to donate all usable organs for transplant after his death, Mr. Edhi’s corneas provided sight to two individuals the very day after his demise. Even in absentia, he was indeed the change he wished to see.

With his passing, Abdul Sattar Edhi has passed the baton to his partners-in-arms, his wife Bilquis and his son Faisal, both of whom he worked with closely. The mother and son know well they have big shoes to fill. The task at hand isn’t simple. Taking over the mantle from “the world's greatest living humanitarian” is no easy feat, but they are now more committed than ever.

And as he headed out for his father’s funeral prayers, Faisal, the man now at the helm of the foundation’s affairs, asked for office proceedings to resume as normal. For him there was no better way to honor his father. Even on the day when the foundation’s patron-in-chief was being laid to rest, on Faisal’s request, his razaakars were out in the field, at their desks, behind the wheels of their ambulances, and in their soup kitchens doing what needed to done — caring. The man himself may be no more, yet his legacy not only sustains but thrives. Salam, Edhi!