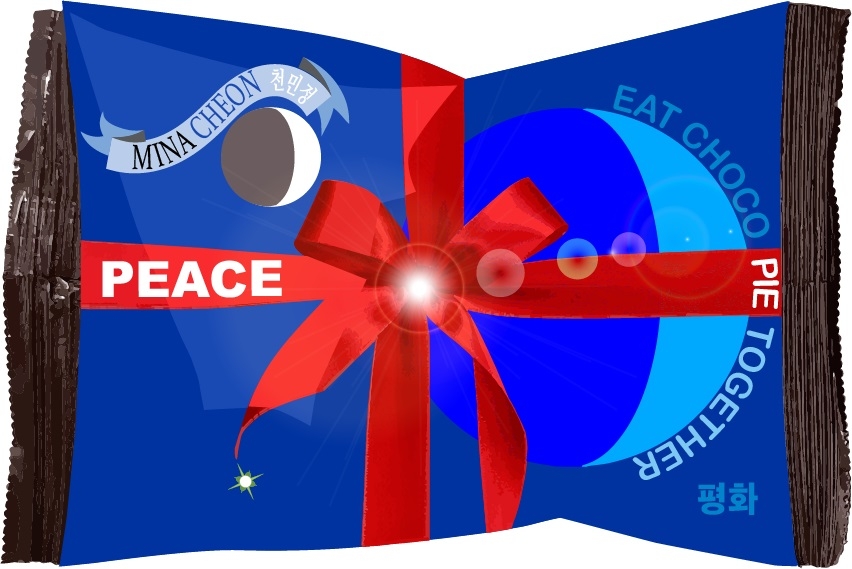 New York, NY; August 17, 2020—The Asia Society Triennial has launched a new digital initiative: Eat Chocopie Together, presented in collaboration with Korean artist Mina Cheon as a response to the physically distant conditions of the pandemic. This initiative, invites anyone, anywhere to extend love and peace by sharing virtual Chocopies with friends and loved ones via the website EatChocopieTogether.com. The project premiered on August 15, Korean Liberation Day—the only national holiday celebrated in both North and South Korea—commemorating the end of the decades-long Japanese occupation of Korea.

Chocopies, a South Korean chocolate-covered, marshmallow-filled snack cake, became one of the most desirable consumer products in North Korea after South Korean workers gifted them to their North Korean peers at the jointly managed Kaesong Industrial Complex, prior to its closure in 2013. In 2014, this treat was reportedly banned in North Korea. Since then, Chocopies have been making it across the border in creative ways; South Korean activists have even used helium balloons to launch thousands of Chocopies over the DMZ border into North Korea, some with messages of love and care.

Eat Chocopie Together is based on Mina Cheon’s original artwork, an installation of thousands of stacked Chocopies which viewers are invited to eat. This communal experience was meant to bring awareness of the two Koreas working towards peace and unification. When Cheon last showed her Chocopie installation at the 2018 Busan Biennale in Korea, it became a national sensation with South Korean President Moon Jae-in and First Lady Kim Jung-sook participating.

“Eat Chocopie Together is how art promotes peace and healing,” said Cheon. “As the Chocopie has become the cultural symbol of inter-Korean unification efforts, from the Koreas to the world, I hope that every bite taken is one towards global peace, love, and kindness.”

At EatChocopieTogether.com, visitors can choose to share with friends five unique Chocopie designs, specially created by the artist to represent important aspects of the initiative: LOVE, PEACE, SHARE, EAT, UNITE. In addition to the joy produced by sharing a delicious virtual snack, the project has a charitable component. Each Chocopie automatically generates a donation of $2 in the names of the two participants to the Korean American Community Foundation COVID-19 Action Fund, up to a total gift of $5,000. The Fund supports non-profit partner organizations working at the front line of the pandemic providing essential services to the most vulnerable Korean Americans.

“With increasing uncertainties facing community-based installations such as Eat Chocopie Together, it was crucial to look to digital variations, so the public and our members alike may still enjoy the art of the Triennial. As a bonus, this was a felicitous initiative to have real social impact, a testament to the role of art during these trying times,” said Ken Tan, Executive Director of Global Artistic Programs and Deputy Director of Asia Society Museum.

Mina Cheon will be featured in Part 2 of the Triennial (March 16, 2021–June 27, 2021) with new artworks installed at the Asia Society Museum, as well as a physical iteration of Eat Chocopie Together. The inaugural Asia Society Triennial, titled We Do Not Dream Alone, will launch in two successive parts beginning with Part 1 opening October 27, 2020, on view through February 7, 2021,

About the Artist
Mina Cheon is a global Korean new media artist, scholar, and educator who divides her time between Korea and the United States. Cheon has exhibited her political pop art known as “Polipop” internationally and draws inspiration from global media and popular culture to produce work that intersects politics and pop art in evocative ways. While she creates work that ranges in medium, its content is in historic alignment to appropriation art and global activism.

Cheon’s thematic focus includes geopolitical and contested spaces, race culture and postcolonialism, and Asia’s relationship to the western world in global media culture and reflects the transgenerational trauma of Korea’s history, its division and war, and Japanese colonization. Having parents originate from the North and herself part of the Korean global diaspora, Cheon’s art results from a lifetime of working with a cultural comparative lens and understanding Asia through its power relations with the world. In particular, she has worked on North Korean awareness, Korean unification and reconciliation efforts, and global peace projects since 2004.

As an artist, while assuming different artistic pseudonyms for the past twenty years such as Minaliza1000, M-1000, Jae Son, Cheon’s latest avatar and alter ego is a North Korean artist named KIM IL SOON who made her first international public appearance at the Pulse Art Fair NY in 2013.

Cheon's states, "As a Korean, the idea of having two artistic identities, South Korean Mina Cheon and North Korean Kim Il Soon, is an obvious reflection on the country’s state of being divided. It makes all the sense in the world that if a country is split so should the artist in practice."

Support
Eat Chocopie Together is made possible by the generosity of the Korea Foundation and an anonymous donor to the Korean American Community Foundation.

Asia Society provides a forum for the issues and viewpoints reflected in both traditional and contemporary Asian art, and in Asia today.