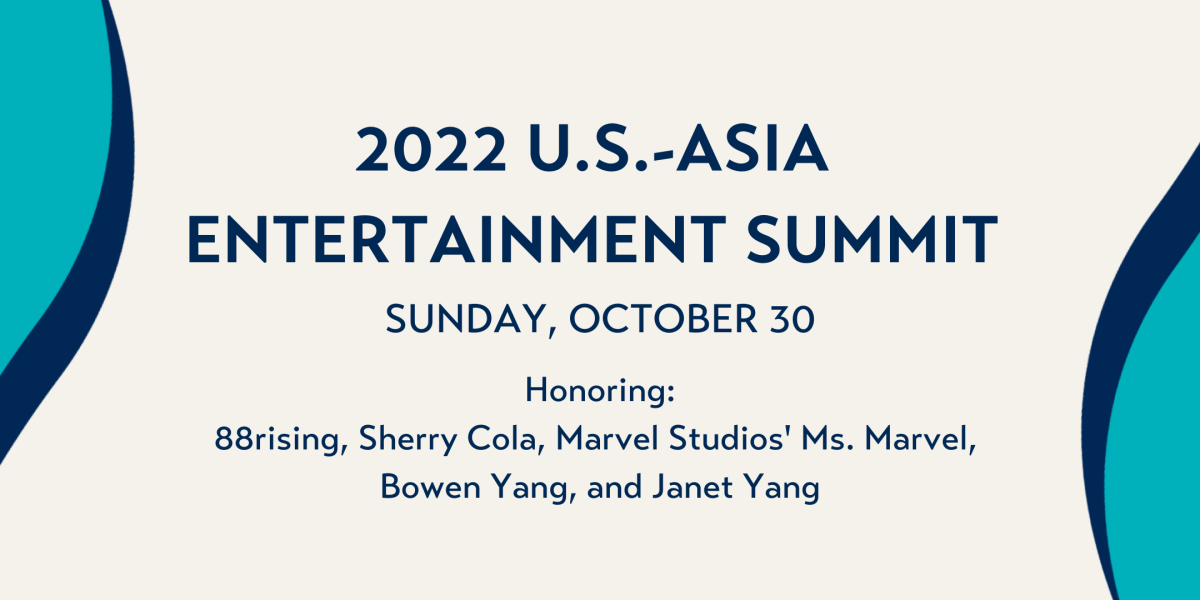 LOS ANGELES; October 19, 2022 – Asia Society Southern California (ASSC) is hosting the annual U.S.-Asia Entertainment Summit on Sunday, October 30, 2022 at the Skirball Cultural Center in Los Angeles. Growing each year, the Summit continues to bring together leading Asian and Asian American talent, creators and innovators in entertainment who are carving new paths in representation and cross-cultural understanding.

This year, ASSC is thrilled to honor the creative talent behind the critically acclaimed Disney+ series from Marvel Studios, Ms. Marvel, as well as Bowen Yang (Saturday Night Live, Fire Island, Bros.), Sherry Cola (Good Trouble, Turning Red), and music platform and record label 88rising, with Asia Entertainment Game Changer Awards. This award was introduced in 2019 to recognize achievements and people whose impact in entertainment transcends borders between Asia and the world. In addition, Janet Yang, ASSC’s U.S.-Asia Entertainment Summit Chair, and recently-elected President of the Academy of Motion Picture Arts and Sciences, will receive the Career Achievement Award.

This year's honorees are leaders in a tectonic shift that is bringing more and more Asian voices and stories to the masses - in must-see, must-hear, inspiring, relatable ways. The award for Ms. Marvel, the hit show that introduced the world to the first Muslim and South Asian woman to be a Marvel superhero, reflects ASSC’s Asian Women Empowered initiative, which is focused on convening influential Asian women to inspire and invest in the next generation.

Honorees will be recognized at the Summit’s Gala Dinner from 7-9 p.m., which will also feature a performance from singer-songwriter Paravi. Her music has built an audience of over 3 million followers and was recently featured on the Elvis soundtrack.

Now in its 13th year, the Summit’s daytime conference from 1 - 5 p.m. will feature several panels and must-see speakers. Highlights include:

“It’s such an exciting time for Asian storytellers and performers from all over the world,” said Janet Yang, Chair of the U.S.-Asia Entertainment Summit. “We are seeing new bars set for what representation looks and feels like to audiences everywhere, and we are watching real, meaningful change take place before our eyes. We are so inspired by the bold work, passion and artistry of all of our honorees and speakers who are helping to drive this change, and are truly grateful that they are sharing their gifts with the world.”

The U.S.-Asia Entertainment Summit continues to be a prestigious gathering of dealmakers, thought leaders, and content creators in the United States and Asian entertainment spaces. It has a focus to look ahead and champion the AAPI leaders creating momentum for those that follow. Building bridges across cultures remains a primary goal for Asia Society, and entertainment plays a critical role in achieving that.

“The U.S.-Asia Entertainment Summit is always a highlight for ASSC because it shines a light on what this industry can accomplish in terms of growing cross-cultural understanding,” said Katie Soo, Asia Society Trustee and ASSC Chair. “Entertainment moves culture. When these extraordinary visionaries come together and look toward the future as a community – the opportunities for fueling knowledge, inclusivity and progress feel limitless.”

Founded in 2010, this annual signature ASSC event was originally created as a forum for filmmakers from the U.S. and China to collaborate. It has since expanded to a robust conference analyzing the driving forces and current trends transforming entertainment across all of Asia and beyond film – to television, digital and streaming content, music and gaming.

Established in Los Angeles in 1985, Asia Society Southern California (ASSC) is ideally situated at the gateway to the Asia-Pacific region. ASSC has played a pivotal role through creative programs and activities in increasing shared knowledge, enhancing dialogue, and furthering cultural exchanges transcending regional boundaries. As part of the global Asia Society, which was founded more than 60 years ago in New York City, ASSC has launched many creative initiatives and programs addressing current issues of importance across the fields of the arts, culture, policy, business, and education. Find out more at  AsiaSociety.org/SouthernCalifornia.