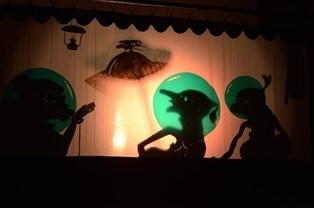 NEW YORK; December 16, 2016 - Asia Society presents the world premiere of God Bliss (In the Name of Semelah), Eko Nugroho’s newest work for Wayang Bocor, the exciting new contemporary theater company from Indonesia. This newly commissioned piece weaves together traditional elements of Indonesian wayang (shadow puppets) with live theater and scripts that cast a satiric view on contemporary topics. Nugroho, one of Indonesia’s most provocative and original visual artists, pioneered Wayang Bocor in 2008. Literally translated as “leaky shadow,” Wayang Bocor is a tongue-in-cheek reference to the theater company’s ability to bend the rules of traditional wayang and use a distinctive blend of high and low art. In their latest work, street art, cartoon characters, folk art, traditional culture, and video game culture collide to create a multimedia meditation on historical and contemporary life.

“My work is very much informed by my background in street art, and I have always worked a lot in public space and with the local community,” Nugroho says. “Many of the figures in my work, for instance, are masked in some way. In Java, the mask is a very symbolic part of traditional culture, and the tradition of shadow theatre has been an important influence for me.”

Traditional wayang kulit (shadow play) is a complex Javanese art form that integrates ritual, philosophy, comedy, and social commentary to tell stories through puppetry and music. The dhalang, or shadow master, serves as the central narrator, drawing on a large repertoire of stories taken mainly from the Mahabarata and Ramayana, epics originally derived from India and transmitted orally and in writing in Java and Bali for over a thousand years. The gamelan (a traditional instrumental ensemble that typically includes many bronze percussion instruments) sets the scene and provides an effective background for the dhalang’s story-telling.

God Bliss (In the Name of Semelah) tells the tale of Islam’s arrival in Java during a time of turmoil in the fifteenth century, when Islam became absorbed as a part of Javanese culture that also included elements of Hinduism, Buddhism, and animism. At that time the kingdom of Majapahit was slowly crumbling and there was a spiritual void. Hunger and poverty spread throughout the kingdom and society was in chaos. In the tale imagined by Nugroho and told through a contemporary lens, a man in a black suit with his face covered by a cloth, jumps from roof to roof carrying a sack full of goods. His name is Maling Aguna and, like Robin Hood, he steals from the wealthy and gives presents to the poor. One day, Maling Aguna sees a Muslim holy man (ulama) passing by and decides to rob him. However, when the man takes soil from the ground and turns it into gold, Maling Aguna instead prostrates himself before the holy man. Transformed, Maling Aguna leaves to meditate on a river bank, cleansing himself of his past sins and finding a new purpose.

Nugroho experiments with the methods and symbols of traditional wayang in God Bliss (In the Name of Semelah). The play opens as traditional shadow plays in Java do with the “tree of life” (Gunungan) puppet, which symbolizes the creation of the universe. Nugroho also makes use of the beloved Javanese clown figures Bagong, Gareng, and Petruk, who provide levity, while adding his own cast of characters—live actors in elaborate costumes and new, absurdist puppet characters—who interact with each other in front of and behind multiple screens. The new characters include some of Nugroho’s signature half-human, half-machine creatures. With their smokestack heads, arms ending in snarling animals, hands like pliers, and legs with wheels, they symbolize human identity distorted by outside influences. A pre-recorded score by composer Ishari Sahida uses various forms of Indonesian percussion including Javanese gamelan. At the heart of this art form—as in so many others Nugroho has explored—are the collaborative efforts of a community of talented people: playwrights, musicians, directors, dancers, stage managers, artists, and traditional artisans.

God Bliss (In the Name of Semelah) is commissioned by Asia Society, and created by Eko Nugroho with writer and director Gunawan Maryanto, lighting designer Banjar Tri Andaru Cahyo, music composer Ishari Sahida, and is supported by a cast of eight Indonesian actor-puppeteers.

Tickets are $20 for Asia Society members; $22 for students/seniors; and $25 for nonmembers. Free for APAP badge holders, pre-registration required. For more information and to purchase tickets, visit AsiaSociety.org/NY. Tickets are available for purchase by calling the Asia Society Box Office at 212-327-ASIA (2742). Members of the press interested in tickets and more information should contact pr@asiasociety.org or 212-327-9271.

Following its premiere in New York, God Bliss (In the Name of Semelah) travels to Carolina Performing Arts at the University of North Carolina at Chapel Hill, for a performance on Friday, January 20, 2017. The Asia Society performances coincide with Video Spotlight: Eko Nugroho, an exhibition of single-channel video works by the artist from the Asia Society Museum Collection on view through April 16, as well as On Site: Eko Nugroho, a site-specific mural to be created by the artist at Asia Society from January 7 to 9 where members of the public are invited to watch the artist at work.

God Bliss (In the Name of Semelah) was commissioned by Asia Society as part of the ongoing initiative Creative Voices of Muslim Asia, supported by the Doris Duke Foundation for Islamic Art. With additional support from Carolina Performing Arts at the University of North Carolina at Chapel Hill. Presented as part of The Public Theater’s Under the Radar Festival.

About the artist
Eko Nugroho is one of Indonesia’s most acclaimed contemporary artists. Born in 1977 in Yogyakarta, Indonesia, he is part of the “2000 Generation” that came of age during the period of upheaval and reform that occurred in the wake of the 1997 Asian financial crisis, the subsequent fall of the Suharto regime, and the transition to democracy in Indonesia.

Nugroho grew up in Java, and lives and works in one of the island’s major art centers, Yogyakarta. His works, which incorporate socio-political commentary, are grounded in both local traditions and global popular culture. In particular, he has cited the influence of traditional batik and embroidery styles, and Javanese shadow-puppet theater (wayang). The influence of the latter can be seen in the strange, hybrid figures that populate his work. In 2008, he created his own style of puppet theater and established the theater company Wayang Bocor.

Nugroho’s work is also inspired by contemporary street art, graffiti, and comics. In 2000, he founded Daging Tumbuh, a collaborative zine that invites participation from non-artists. In addition to drawing and painting, he works in a variety of other media, including murals, sculpture, animation, videos, and tapestry. He often works in public spaces and with the local community.