Asia Society Presents 'Myanmar's Moment,' a Series of Programs to Coincide With the Landmark Exhibition 'Buddhist Art of Myanmar' 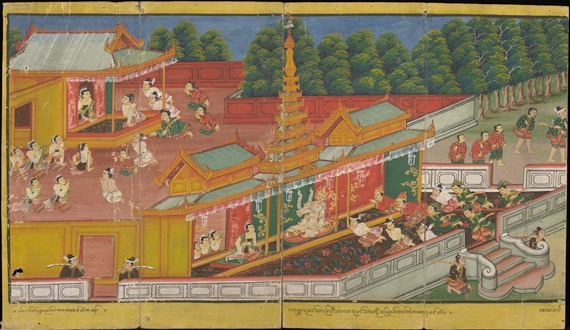 Asia Society is proud to present Myanmar’s Moment, a series of leading-edge programming built around the groundbreaking Asia Society Museum exhibition Buddhist Art of Myanmar, which runs from February 10 to May 10, 2015, in New York City. The exhibition is the first major presentation in the West devoted solely to the art of Myanmar and includes a treasure trove of sculptures of the Buddha, many of which are leaving Myanmar for the first time. “Asia Society has deployed extraordinary diplomacy and artistic expertise to share these treasures,” says Josette Sheeran, president and CEO of Asia Society. “These alluring statues, and the smiles of these Buddhas, offer a once-in-a-lifetime opportunity for viewers. Knowing how hard it was — given the recent history of Myanmar and the distant homes of these works — makes me that much prouder of the exhibition. It’s a tour de force.”

Asia Society has been deeply engaged with Myanmar for years on policy issues as well as arts and culture. This approach, drawing on the arts and policy, is at the core of the institution’s work, and mirrors what the Society has done in recent years on China, India, Iran, Pakistan and other Asian nations. “In the case of Myanmar,” said Sheeran, “we are leveraging a long and profound engagement with a nation that has undergone great changes in the past few years.” Myanmar’s Moment represents the culmination of years of Asia Society’s deep involvement in the country. A decade ago, the Society brought a dozen of the country’s most celebrated performers to New York, exposing many in our audience to traditional Burmese music and dance for the first time. Asia Society has long sought to play a valuable role in strengthening relations between Myanmar and the United States, and has aided discussions related to ongoing democratic and economic reforms in Myanmar. Until very recently, Myanmar's political isolation limited the advancement of scholarship on its artistic and cultural heritage, rendering an exhibition of this kind impossible.

The Exhibition
Buddhist Art of Myanmar comprises approximately 70 spectacular objects from the fifth through early 20th century. Included are stone, bronze, and lacquered wood sculptures as well as textiles, paintings, and ritual implements. The exhibition showcases Buddhist objects created for temples, monasteries, and personal devotion, presented in their historical and ritual contexts and highlighting the presence of Buddhism in Myanmar since the first millennium. Asia Society worked with officials from the Myanmar Ministries of Culture and Religious Affairs and lending museums in the country, as well as public and private collections in the United States, to realize this endeavor.

Beyond the Exhibition: Myanmar’s Moment
The season of programming, Myanmar’s Moment, will include talks, films and performances exploring Myanmar’s past, present and future. Art talks will explore the history of Buddhism in Myanmar including a lecture with guest curator Donald M. Stadtner on February 10 and another with guest curator Sylvia Fraser-Lu on March 15. Two rare performances of Zat Pwe, a Myanmar tradition combining elements of dance, song, comedy, and drama, will be performed by the revered Shwe Man Thabin troupe on April 10 and 11. The troupe also gives a master class on April 12.

Programs will also address current issues in Myanmar. A retrospective of films made by director Midi Z, who was born and raised in Myanmar and is currently based in Taiwan, will be screened in March and include discussions with the director. The three feature films and two shorts explore the lives of the Chinese community and other displaced people in Myanmar.

Panel discussions addressing a range of issues — including the state of civil society, government and economic reform, the climate for foreign investment and the status of minority populations — are planned.

Exhibition background, public programming details and the latest updates about Myanmar’s Moment programming will be available at AsiaSociety.org/NY. Online content features will give additional background on the exhibition, about Asia Society’s work relating to Myanmar in the arts, culture and policy, and Myanmar-related public programming held in recent years.

Asia Society Policy Work on Myanmar
Since 2009, Asia Society's Myanmar Initiative has helped to strengthen relations between Myanmar and other countries and to support Myanmar's transition to democracy. A series of seminal meetings in September 2011 brought together for the first time policymakers from Myanmar, the U.S., and the international community to consider prospects for reform in Myanmar. These efforts were later credited by the U.S. government, the government of Myanmar, and the democracy icon and Nobel laureate Aung San Suu Kyi with helping to ease and accelerate the country's transition to democracy.

When Myanmar President Thein Sein was planning his first public appearance in the United States in September 2012, he chose Asia Society as the venue. Likewise, when Aung San Suu Kyi made her first visit to the United States in four decades that fall, she chose an Asia Society event in Washington, D.C. “We look to friends like you,” she said of Asia Society, “to help us along this difficult path.” An Asia Society report issued in June 2013 examined 10 critical challenges to sustaining that transition and made suggestions for advancing and normalizing U.S.-Myanmar relations.