Ambassador Chan Heng Chee, Singapore’s longest-serving ambassador to the U.S., and John L. Thornton, chair of Brookings Institution and a former president of Goldman Sachs, were named co-chairs of the board of trustees. Their appointment is effective November 6, 2017.

“Asia Society is privileged to welcome two such preeminent individuals as co-chairs of our board, together with a very dynamic group of new Trustees,” said Josette Sheeran, Lulu and Anthony Wang President and CEO of Asia Society. “Our new leadership will guide our critical work as we launch the campaign for $135 million to fund new arts and culture initiatives, promote global education, and advance the Asia Society Policy Institute.”

Ambassador Chan Heng Chee is currently Ambassador-at-Large at the Singapore Ministry of Foreign Affairs, chairperson of the National Arts Council, and a member of the Presidential Council for Minority Rights. Her involvement with Asia Society dates back to 1991, when she joined its global council. As Singapore’s ambassador to Washington, D.C., from 1996 to 2012, she hosted numerous Asia Society events at the Residence. She has served as a trustee of Asia Society since 2012 and as Vice Chair of the board since 2015.

“I look forward to helping Asia Society deepen its work in the ASEAN region,” said Ambassador Chan. “China, the Korean Peninsula, India and the Middle East may dominate the headlines, but engagement in ASEAN is critical at a time when the region is going through profound economic, social and political transitions. Opportunities abound and a more comprehensive relationship between the US and the region would be greatly beneficial.” 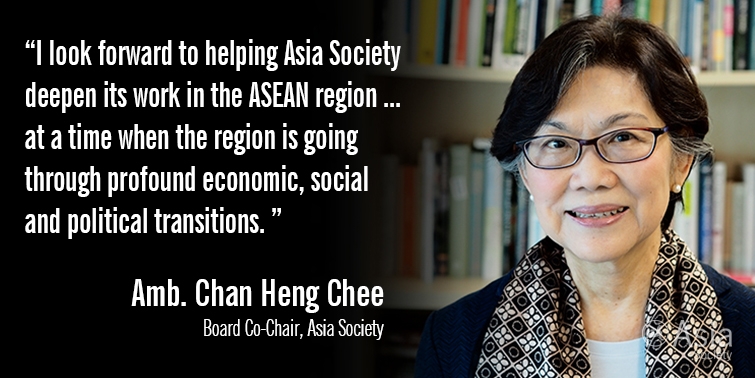 John L. Thornton retired as president and co-chief operating officer of Goldman Sachs in 2003. He is currently chairman of Barrick Gold Corporation and an advisory board member of China Investment Corporation and China Securities Regulatory Commission. He is also a professor and director of the global leadership program at Tsinghua University in Beijing. He served as a trustee of Asia Society from 1998 to 2010, and was instrumental in advancing the organization’s China-related initiatives.

“The rise of China and Asia, and the region’s engagement with the U.S., will increasingly set the agenda for the world in the 21st century,” said Thornton. “This is an unprecedented opportunity for mankind, even with the challenges that remain. That is why Asia Society’s mission of building bridges between the East and West – and between the U.S. and China in particular – has never been more vital.” 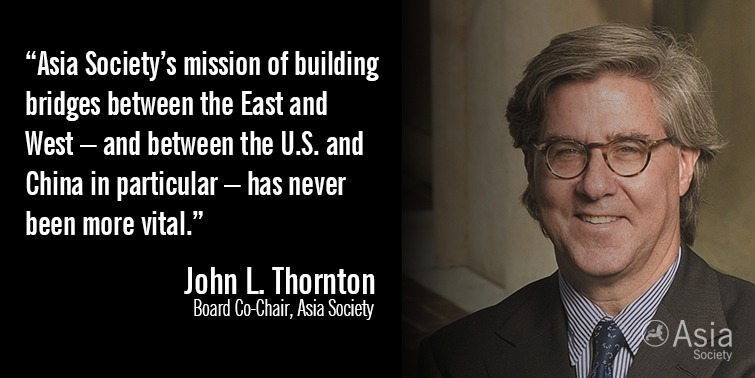 The new co-chairs succeed Ronnie C. Chan and Henrietta Fore, who served a six-year term as co-chairs. As well as being Asia Society's first co-chairs in Asia and the U.S., Chan was the first Asian, and Fore the first woman to lead the Board since John D. Rockefeller 3rd founded the institution in 1956. Chan and Fore will remain on the board as trustees.

“Ronnie and Henrietta helped Asia Society become a truly global organization. Under their leadership, we opened multimillion-dollar cultural centers in Hong Kong and Houston and extended our footprint into Europe for the first time,” said Josette Sheeran. “They were also instrumental in the establishment of the Asia Society Policy Institute, and they have laid important groundwork for our next phase of growth.”

Ambassador Chan, Thornton, and the new trustees join Asia Society as it launches its capital campaign.

“I became a member of Asia Society 20 years ago because I felt this was the institution that could help me understand Asia,” said Sheeran. “Today, we have so many young people who come to us to learn about Asia. There’s no more important organization that’s building bridges between the United States and Asia than Asia Society.

“With our capital campaign, we’re calling on the bridge builders of the world to help advance our mission: whether that’s a large gift or a $10 donation,” Sheeran added.