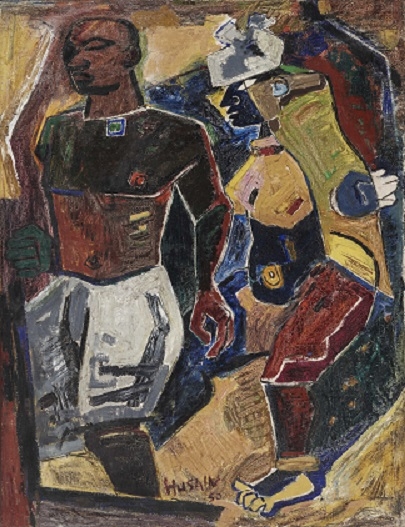 The Progressive Revolution: Modern Art for a New India, on view at Asia Society Museum September 14, 2018 through January 20, 2019.

NEW YORK, July 10, 2018 — Just over seven decades after the declaration of India’s independence in 1947 and the emergence of a modern art movement in India, Asia Society presents a landmark exhibition of more than 80 works by members of the Progressive Artists’ Group, which formed in Bombay, now known as Mumbai, in the aftermath of independence. The Progressive Revolution: Modern Art for a New India examines the founding ideology of the Progressives and explores the ways in which artists from different social, cultural, and religious backgrounds found common cause at a time of massive political and social upheaval.

Though the group disbanded in 1956, the ideas and discussions of its members continued to animate and give visual expression to India’s modern identity, with many of the Group’s artists creating their most iconic works after this period. Works in the exhibition—primarily oil paintings from the 1940s to 1990s—underscore how these artists gave visual form to the idea of India as secular, diverse, international, and united. Like their counterparts in the West, India’s modern masters mined multiple sources of inspiration including the subcontinent and Asia, as well as the wider world. They forged their own distinctive styles that were international in outlook while resonating with Indian sensibilities.

“The works in this exhibition reflect the diversity of Asian modernities, which are not a mirror of the Euro-American experience,” says Boon Hui Tan. “Art was also a way for the Progressive Artists’ Group to validate and celebrate a new secular republic that emerged from a rich, multi-religious tradition in ways that remain relevant today. Asia Society is pleased to present the largest and most comprehensive exhibition of the Progressives undertaken in the United States in recent decades.”

“The Progressives’ Artist Group have come to be seen as the ‘quintessential Indian Moderns,’” notes Zehra Jumabhoy. “They came from all walks of life: rich, poor, Dalits, Muslims, Brahmins, Roman Catholics. They genuinely embodied Indian Prime Minister Nehru’s dream of unity in diversity and his version of an ‘Indian secularism’ that was multi-religious and inclusive. Given the political climate in both India and the U.S. today, I think this principle of tolerance – part and parcel of the Group’s DNA – is vital to rekindle.”

Exhibition organization
The exhibition is organized into three major sections plotting the artistic development of the Group’s celebrated artists. The first section, “Progressives in Their Time,” considers the Group’s origins and early formation, and the context in which the artists were working. A section titled “National/International” examines the Progressives’ use of multiple sources of inspiration, including India’s high art and folk traditions, and ways that they borrowed from a range of styles to create a distinct mode of expression. The third section of the exhibition, “Masters of the Game,” comprises some of the artists’ most iconic works created after the Group dissolved in the 1950s and its most prominent members had traveled to foreign lands.

The exhibition includes rarely seen historic works from the first and earliest shows of the Progressives. Other highlights include two paintings from M. F. Husain and F. N. Souza that were exhibited in the first exhibition of the Progressives in 1949, and a painting by S. H. Raza that was included in the seminal exhibition Trends in Contemporary Painting from India. The exhibition traveled to institutions and galleries throughout the United States between March 1959 and March 1960 as one of the largest presentations of modern Indian painting in this country. Also included is a large-scale crucifixion painting by F. N. Souza that has not been shown in more than six decades.

In conjunction with the exhibition, Asia Society presents a special season of public programs exploring India’s dynamic past, present, and future through performance, film, literature, design, and cuisine. For more information, visit AsiaSociety.org/NY.

Additional support is from Christie's; Jon Friedland and Shaiza Rizavi; Ralph and Ala Isham; Peter Louis, Chandru Ramchandani, and Lal Dalamal; The Mortimer and Theresa Sackler Foundation; Sotheby's; and Kelly and Sundaram Tagore.

Asia Society Museum is located at 725 Park Avenue (at 70th Street), New York City. The Museum is open Tuesday through Sunday from 11:00 A.M. to 6:00 P.M. and Friday 11 A.M. to 9 P.M. (mid-September through June). Closed on Mondays and major holidays. General admission is $12, seniors $10, students $7; and free for members and persons under 16. Find out more at AsiaSociety.org/NY and @AsiaSocietyNY.