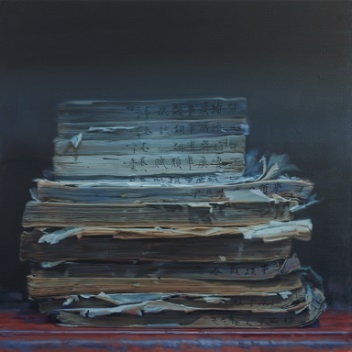 Asia Society presents an exhibition of paintings, installation, photography, and video by Xiaoze Xie (b. 1966 in Guangdong Province, China) tracing the history of banned books in China and exploring the subjectivity of censorship in relation to the shifting nature of sociopolitical and religious ideologies.

Born on the cusp of the Cultural Revolution, Xiaoze Xie experienced the profound power of books firsthand. Formative memories of his grandmother sharing epic tales from classic novels dovetailed with recollections of his father, a school principal, who was forced to collect banned books slated for destruction under Mao. Doomed titles from the artist’s youth became forbidden, yet tantalizing objects that have continued to inspire Xie as a central aspect of his artistic practice.

Xie’s focus on books banned in China was initiated during a 2014 residency as a faculty fellow at the Stanford Center at Peking University when he compiled an index of banned books from the Qing Dynasty (1644–1911) through the Republic of China (1911–49) into the present day. The artist expanded this research project to chart the history of banned books—through the use of painting, photography, and installation—including Dream of the Red Chamber (Hong Lou Meng) by Cao Xueqin, and Water Margin (Shui Hu Zhuan) attributed to Shi Nai'an, which have become among the most revered and beloved novels in Chinese literature. Xie’s body of work provides a means to consider changes in cultural standards and their influence on shaping modern Chinese society.

On view in the exhibition are a selection of oil paintings, a photographic installation of editions of books printed in the Ming (1368–1644) and Qing dynasties, and a 46-minute video documentary about Xie’s work and the history and impact of literary censorship in Mainland China. Objects of Evidence (Modern Books), comprises three vitrines containing first edition banned books from Mainland China, accompanied by later editions sourced from outside the mainland, from three modern eras in Chinese history: the Republican Era (1911–49), the Hu Feng Anti-party Clique period in the 1950s, and the Cultural Revolution (1966–76). Foreign books in translation—including A Tale of Two Cities by Charles Dickens and Jane Eyre by Charlotte Brontë—were among the books banned for their socially corrupting material. To date, the artist has collected over 750 publications for this ongoing project.

Also included in the exhibition is a searchable database, created by the artist as an interactive complement to Objects of Evidence, of information about books censored in China from the Ming dynasty to the present including author, book title, and the date and reason for censorship. Visitors may access selected publications under the following subjects: politics, literature, religion, academics, and morality. The database also includes a brief overview of the history of censorship in Mainland China.

Related programs
Asia Society has organized the following public programs in conjunction with the exhibition:

Also on view
The following exhibitions are concurrently on view at Asia Society Museum from September 10, 2019 through January 5, 2020:

Exhibition support
Generous support for Xiaoze Xie: Objects of Evidence is provided by Bo Wu, The Lou Foundation, and the Fortinet Founder. This exhibition was made possible with support from the Department of Art & Art History at Stanford University. Asia Society appreciates the cooperation of Chambers Fine Art.