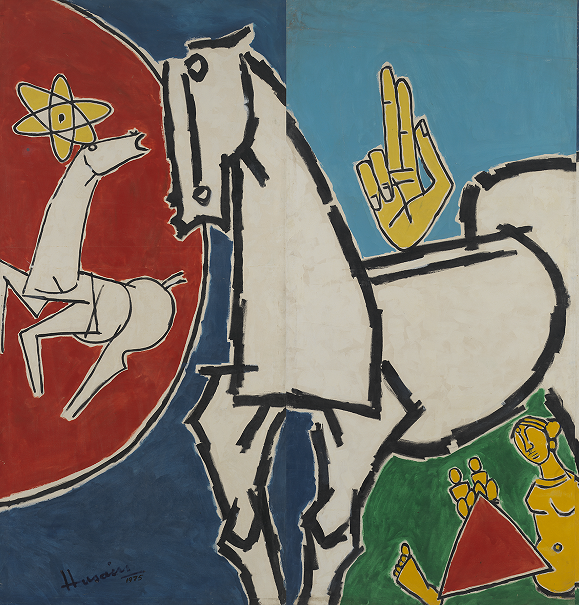 Marguerite and Kent Charugundla Collection. Image courtesy of the lenders

Asia Society Museum presents Lightning, a mural-sized painting by M.F. Husain, a founding member of the Bombay Progressive Artists Group. Created during a tumultuous period of India’s history, this rarely-seen work was made on the occasion of Indian Prime Minister Indira Gandhi’s 1975 Congress Party rally in Bombay (Mumbai). That same year, Prime Minister Gandhi imposed a State of Emergency across India in response to what she perceived as a state of dangerous instability in the country.

The bold, graphic style of the work suggests that Husain drew upon his experience as a former professional movie billboard painter to create Lightning’s twelve massive panels. These panels, which are each ten feet high and five feet wide, feature much of the visual iconography that defined Husain’s attempts to depict the complexity and richness of a new India.

Lightning is filled with visual references to India in the 1970s and allusions to Indira Gandhi, though she is absent visually. Against a background of green, red, blue, and purple, white horses outlined in black charge in an energetic and frenetic line toward the left, as if indicating the unstoppable progress of the new nation.

A grain stalk references India’s Green Revolution from 1967 to 1978 that was initiated by the Prime Minister in an attempt to make the nation self-sufficient in grain production. A depiction of a mother with her two young children marked with a red triangle denotes India’s family planning policies, which included mass, forced sterilization under the State of Emergency. Other visual references in Lightning evoke the country’s industrial and military ambitions.

Juxtaposed with the painting’s contemporary references are images of horses that Husain modeled after historical prototypes: the horse from Tang Dynasty tomb pottery and the ink paintings of twentieth-century Chinese master Xu Beihong.

Lightning is part of a series of paintings about Indira Gandhi, which Husain continued even after her assassination in 1984. Ironically, by the 1970s, Husain’s depiction of the political leader as the embodiment of Mother India resulted in the loss of support of some members of the intelligentsia and artistic community critical of Gandhi’s leadership. In the following decades, the rise of the Hindu right ultimately resulted in Husain’s exile from India, the land of his birth.

M.F. Husain: Art and the Nation is on view at Asia Society Museum in New York from March 20 through August 4, 2019. It follows Asia Society Museum’s recent exhibition The Progressive Revolution: Modern Art for a New India, which focused on the 1930s–1960s and included early work by the artist. The current exhibition showcases the development of Husain’s post-1960s work and provides the opportunity to see an artwork that is profoundly defined by its historical context. The work is a reminder of the complex and sometimes difficult position that can confront an artist who adopts a specific political stance in the face of historical change.

About the artist
Maqbool Fida Husain was born in 1915 in Pandharpur, Maharashtra, India. He was a founding member of the Progressive Artists’ Group and an internationally-recognized artist at the center of Indian modernism. He was awarded the Padma Bhushan in 1973 and the Padma Vibhushan in 1991, two of the highest civilian honors, by the government of India. Beginning in January 2006, Husain entered self-imposed exile. He was forced out of India by threats from Hindu Right extremists enraged by his paintings of nude Hindu goddesses. He accepted Qatar’s offer of citizenship in 2010 and died in exile in London in 2011.