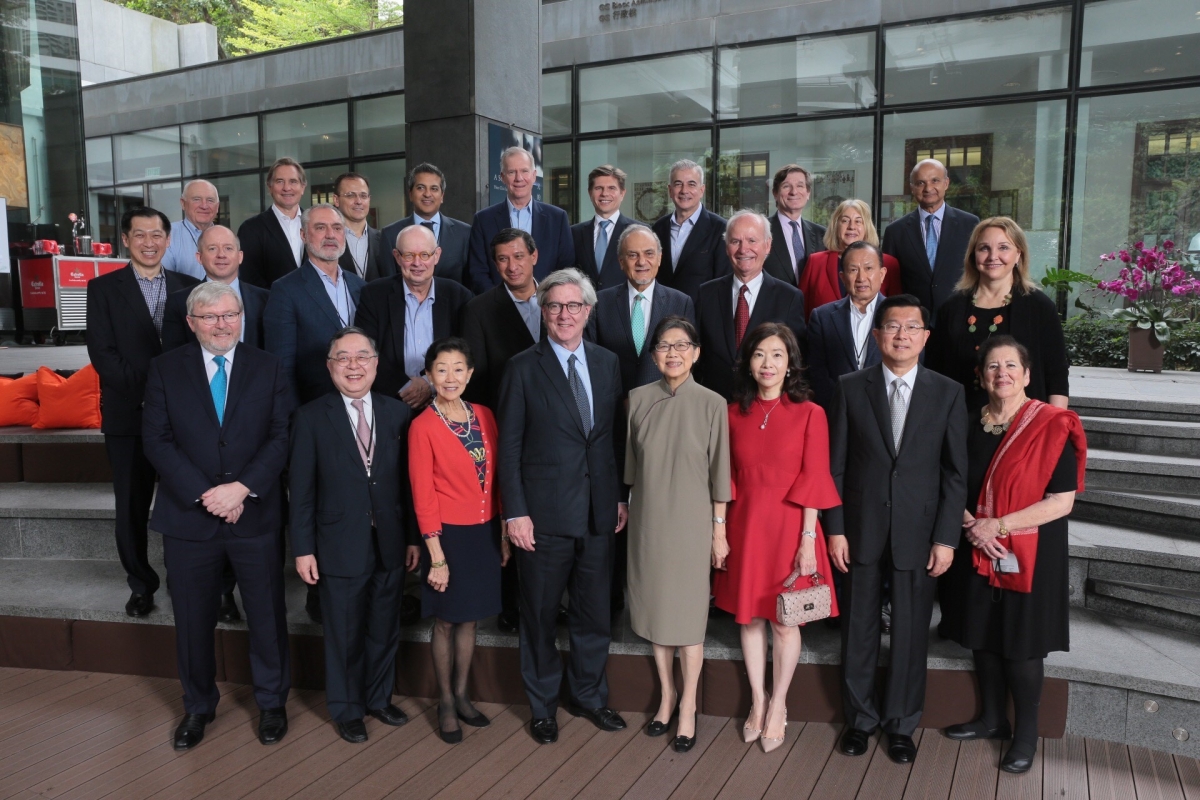 HONG KONG, March 29, 2019 — The Asia Society global board of trustees announced the election of three new members at its spring meeting in Hong Kong: Stephen Riady, Harit Talwar, and Frederick “Fritz” Demopoulos. Each has extensive experience in Asia and knowledge about the issues driving the U.S.-Asia relationship, as well as a longtime commitment to and passion for Asia Society and its programs.

Stephen Riady is a longtime supporter of the Asia Society, continuing the legacy of his family. His father Mochtar served as an Asia Society Trustee from 1997-2005 and a Global Council member from 1989-1997. “We are honored that Stephen is joining the Asia Society Board, building on his family’s longstanding commitment to the institution, and bringing to our Board his leadership within Singapore’s business community,” said Asia Society President and CEO Josette Sheeran. “The Riady family supported our Hong Kong Center from its beginnings and played a critical role in the creation of the Center's Lippo Amphitheater.”

Harit Talwar is global head of Marcus, Goldman Sachs’ digital consumer financial services business, and a leader in building U.S.-India ties. “Harit is a star in the field of digital finance and innovation, an area of ever-greater importance to Asia and the world,” Sheeran said. “With a distinguished career in banking and strong ties to the Indian community in the United States, Harit is a stellar addition to the Asia Society global family.”

An alumnus of the inaugural class of the Society's Asia 21 Young Leaders, Fritz Demopoulos has been engaged in Asia Society initiatives in Hong Kong, mainland China, and beyond. Welcoming him to the Board, Sheeran said: “Fritz Demopoulos brings to Asia Society the wisdom and experience of a successful tech entrepreneur, and an investor with a deep understanding of China. He has been a generous and enthusiastic champion of Asia 21, and we are thrilled to deepen our connection through his participation on the Board.”

Dr. Riady has made numerous contributions in the field of public service. He has held various roles, including Founding Honorary Advisor of the University of Hong Kong Foundation for Education Development and Research, Patron of the Singapore Badminton Association, Fellow of the Duke of Edinburgh’s Award World Fellowship and Patron of the Securities Investors Association Singapore (SIAS). Dr Riady also sits on the Advisory Board of the Sloan School of Management, Massachusetts Institute of Technology, USA.

He is a member of the Committee to Promote Economic Co-operation between Fujian and Hong Kong and an Honorary Citizen of Shenzhen, PRC. Dr. Riady established the Stephen Riady Group of Foundations in 2010 in order to create opportunities for aspiring youths by enabling them to realise their potential and make a positive difference to their lives and the lives of people around them. Since it was established, the Stephen Riady Group of Foundations has committed to various grant scholarships and bursaries over the past years across many educational institutions in Singapore and abroad.

Dr. Riady was conferred the Chevalier de L’Ordre des Arts et des Lettres by the French government and Ernst & Young (EY) Strategic Investment Entrepreneur of the Year 2007. He was also conferred the EY ASEAN Entrepreneurial Excellence Award 2018. Dr. Riady is a graduate of the University of Southern California and holds a Master Degree of Business Administration from Golden Gate University, USA. He was conferred an Honorary Degree of Doctor of Business Administration from Napier University, Edinburgh, United Kingdom, and is one of the first Honorary University Fellows installed by the Hong Kong Baptist University.

Harit Talwar is global head of Goldman Sachs’ digital consumer financial services business, including the Marcus by Goldman Sachs and Clarity Money platforms. He is a member of the Firmwide Client and Business Standards Committee, Firmwide Conduct and Operational Risk Committee and Americas Diversity Committee. Harit joined Goldman Sachs in 2015 as a partner.

Prior to joining the firm, he was president of US Cards for Discover Financial Services as well as chief marketing officer and a member of Discover’s Executive Committee, where he played a key role in driving overall strategy. Before that, Harit was managing director of Morgan Stanley’s Consumer Banking Group International. He also spent 15 years at Citigroup, working in India, the Middle East, the United States and Europe. During this time, Harit held a number of senior roles including general management and country management positions in cards, loans and retail banking.

Harit is co-chairman of the board of the American India Foundation. He previously held leadership positions with the Museum of Science and Industry, Chicago; the Chicago CMO Summit; the American School of Warsaw, Poland; the College of Lake County, Illinois; Children’s Memorial Hospital, Chicago; and Pratham UK.

Harit earned a BA (Hons) in Economics from Delhi University in India and an MBA from the Indian Institute of Management, Ahmedabad.

Fritz Demopoulos has been involved in a number of entrepreneurial and philanthropic activities within the Asian region over the past two decades. He is passionate about establishing businesses and creative disruption, exploring the ideas behind science and science fiction, and contributing to his community through education and gender equality. Fritz is a long-term resident of Hong Kong with his wife and two daughters.