For changing the landscape of film in China 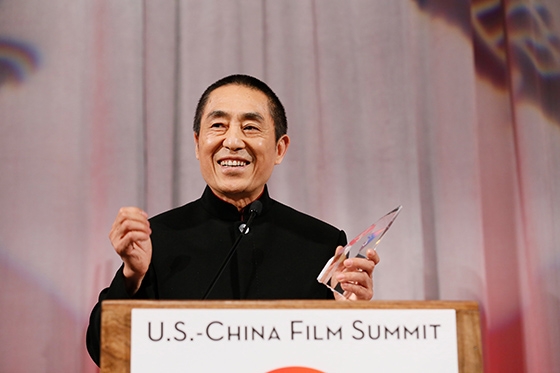 For an aspiring filmmaker, it would be hard to find a more difficult path to success than the one faced by Zhang Yimou. Born soon after China’s civil war to a family who supported the losing Nationalist side, he was brought up in an atmosphere of extreme hardship and political struggle.

Nevertheless, he wasted no time in pursuing his passion for film. Exiled to labor camps in remote regions as a teenager during the Cultural Revolution, he sold his own blood so he could buy his first still camera.

After China’s political turmoil eased in 1978, Zhang took his portfolio — and a major dose of audacity — to the Ministry of Culture and finagled admission to the Beijing Film Academy despite being well over the age limit. From there, he quickly climbed the ranks and in 1987 his debut film Red Sorghum was released to major domestic and international acclaim. Film critic Roger Ebert praised the “fairy-tale quality” imagery, noting that it had a strength in its simplicity that “Hollywood in its sophistication has lost.”

But Zhang’s films were as important for their substance as for their style. His films shattered many taboos in China. They portrayed sexuality on screen, challenged traditional patriarchal attitudes, and tackled sensitive issues related to China’s legal system and the Cultural Revolution.

Zhang’s rise has allowed him to marry seemingly unthinkable divides by boldly challenging convention, while still earning mainstream accolades. He is a filmmaker who has had a film banned in China, yet he was later tapped to direct the spectacular opening ceremony of the 2008 Beijing Olympics. There, he dazzled some 2 billion viewers, including one of his most high-profile fans.

“In one evening of visual and emotional splendor, he educated, enlightened and entertained us all,” Steven Spielberg said. “In doing so, Zhang secured himself a place in world history.”

From To Live, Raise the Red Lantern, and Hero to the soon-to-be-released Great Wall, Zhang — who in 2013 was named artistic director of Le Vision Pictures, the filmmaking arm of Chinese tech company LeEco — has won international praise at every step. Says Spielberg: Zhang "has inspired the world's fascination with China through his cinematic vision."