For using music to heal, in the aftermath of terror 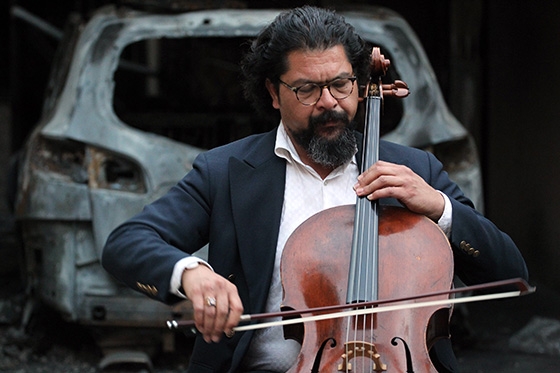 Last April, a car bomb exploded in a cafe in Baghdad’s upscale Mansour district, killing at least 19 people and injuring dozens of others. Hours after the attack, amid the charred debris and shrapnel and heightened security, Karim Wasfi arrived at the site of the bombing armed with a weapon of a different sort: a cello.

For Wasfi, the renowned cellist and conductor of the Iraqi National Symphony Orchestra, the grim scene was a stark contrast to the venues with which he was most familiar. But in the rubble, he had found a setting where his music possessed the power of healing.

“It was an action to try to equalize things, to reach the equilibrium between ugliness, insanity and grotesque, indecent acts of terror,” Wasfi says. “To equalize it, or to overcome it, by acts of beauty, creativity and refinement.”

To some, the moment sparked memories of the great cellist Mstislav Rostropovich, who brought his instrument to the Berlin Wall, and other politically charged venues, in an artistic protest against Soviet communism.

In Baghdad, the cellist was protesting against the violence. As Wasfi played, bystanders snapped photos, and Wasfi’s friend, Ammar al-Shahbander, posted a video of the scene online. The brief performance became a global viral sensation. Weeks later, a separate bombing took al-Shahbander’s life. Heartbroken, Wasfi once again brought his cello and played at that site, too.

In the past year, Wasfi has gone further: He opened a youth orchestra and an after-school youth academy in Baghdad, taking in nearly 300 students from each of Iraq’s fractured religious communities. The pupils Wasfi teaches represent a generation that has finally gotten an opportunity, amid strife and instability, to reclaim its musical heritage.

To Wasfi, music is as basic a need as food and water. It is also, he insists, an agent of healing: “It has a positive impact on the psychology of mankind,” he says. “Because you can breathe better. Because you can think better and clearer. Because you can find more talent within yourself. And, before all that, it's an international language of mutual understanding. It's everything.”