For "social-impact" investing that has changed the game for millions 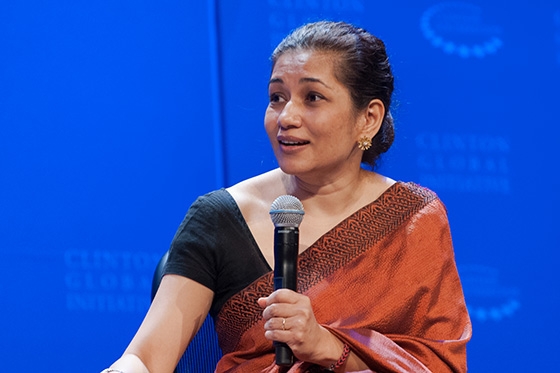 As a young girl in Dhaka, Bangladesh, Durreen Shahnaz would watch as the men in her family left home to go pray at the mosque. The women often stayed behind to feed beggars outside their home. "We didn’t have much," Shahnaz remembers. "It was a post-war nation ravished with famine, but we all had to do our part. It was important for us not just give something to others but also to help them stand on their feet."

That early lesson would inspire Shahnaz and set her on a path that took her from Morgan Stanley to the Grameen Bank and from academia to publishing. She was the first Bangladeshi woman to work on Wall Street and then the first Bangladeshi woman to attend the Wharton School of Business. But at heart Shahnaz was an entrepreneur — a successful one — and a woman who dreamed big. She wanted to change the lives of millions.

In 2010, Shahnaz set out to realize her biggest dream to date. She laid out her vision in a TED talk called "Defiant Optimism for Development." "I had four minutes," she later recalled, "to convince the world about the benefits of a social stock exchange."

Those four minutes made an impact, and four years later she launched the world's first “social stock market” — the IIX, or Impact Investment Exchange for Asia. The exchange introduced a new way to tap into hundreds of billions of dollars in the so-called "impact investment market," to unlock capital for social impact and leverage the power of crowdfunding for investment, not just philanthropy. It was, she says, "a crazy dream, and insanely difficult. You would need an entire ecosystem to make it work."

Shahnaz had built the ecosystem, and today the IIX is improving lives all over Asia. It has converted power plants in Cambodia from diesel to biofuel; built water purification plants in India; provided vocational training in the Philippines; and across Asia the exchange has improved access to credit, affordable housing, clean energy, and low-cost education. Overall, the IIX has reached more than 10 million people — and Shahnaz believes it has struck significant blows in the war on income inequality.

Asia Society has recognized Shahnaz before: She was an early member of our Asia 21 Young Leaders Network. She was also honored by one of her alma maters with the Joseph Wharton Award for Social Impact. Shahnaz finished her acceptance speech with a notion that has encapsulated her whole career: "I leave you with the words of Martin Luther King,” she said. “'The time is always right to do what is right.'"