For using comedy to challenge perceptions, and work for good 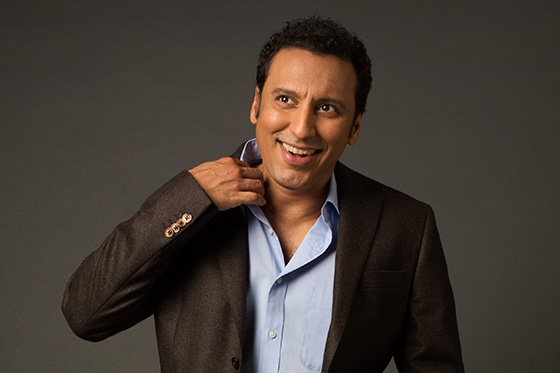 Many Americans first encountered Aasif Mandvi in 2006 during his first of many appearances as “Senior Middle East Correspondent” on Comedy Central’s The Daily Show with Jon Stewart. Mandvi, by then already an accomplished performer on stage and screen, seized his newfound spotlight to become a powerful spokesperson for Muslims and Asian Americans.

Born Aasif Hakim Mandviwala in Mumbai, Mandvi grew up in England and Florida before pursuing acting in New York City. He first made headlines in the late 1990s when Sakina’s Restaurant, a one-man off-Broadway show about the Indian immigrant experience that Mandvi wrote and performed, was called “wonderful” by The New York Times.

As his audience grew, Mandvi challenged stereotypes and provided a voice for Muslim Americans, changing the game in terms of how Asians are viewed on television. In 2015, he co-wrote, produced, and acted in the web series Halal in the Family for the popular comedy site Funny or Die, using the sitcom format to tackle Islamophobia. When not performing, Mandvi uses his fame as a force for good, advocating for an array of charity organizations such as Relief 4 Pakistan, which assists in flood relief in Pakistan; Partners In Health, which brings modern medical care to poor communities in nine countries around the world; and Planting Peace, which helps spread peace around the globe through humanitarian aid and environmental initiatives.

Mandvi aspires not only to provide positive representation for Muslim America — he also hopes to challenge non-Muslim audiences, as he shared recently in The New York Times: “First of all, I want them to be entertained. And I want them to laugh. And then maybe it will make people think about the absurdity of fear and prejudice, and say, oh that’s interesting, I never thought about it that way.”