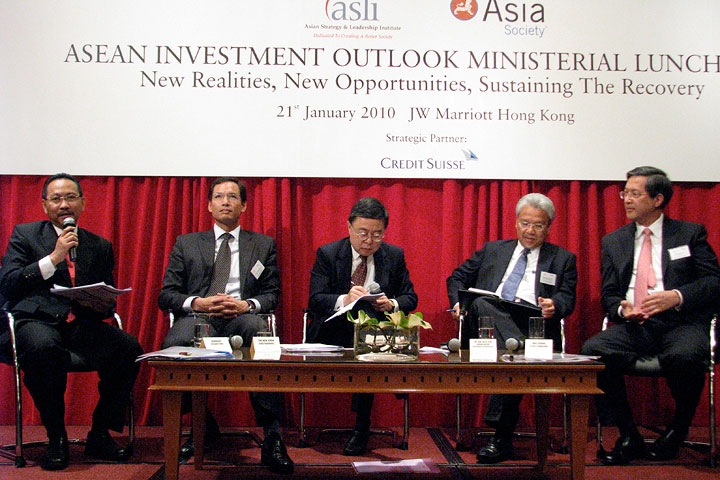 HONG KONG, January 21, 2010 - Asia's emerging markets have been the engines powering the global economy, according to ministers from the Association of Southeast Asian Nations, or ASEAN, who expressed optimism about the road ahead.

At the ASEAN Investment Outlook Ministerial Luncheon, co-organized by the Asia Society Hong Kong Center and the Kuala Lumpur-based Asian Strategy and Leadership Institute, participants were told ASEAN member nations have embarked on major economic stimulus packages while continuing to liberalize their economies to head off the financial crisis.

Ahmad Husni Mohamad Hanadzlah, Malaysia's Minister of Finance II, pointed out, "We are not looking at the current challenges of the economic crisis but the bigger picture. What will be our position after the crisis? We have carried out an extensive study of the economy and feel the need to move out of a middle income to a high income economy."

Bambang Susantono, Indonesia's Deputy Minister for Infrastructure and Regional Development, said, "We are very optimistic about the next five years."

At the same time, Thailand's Minister of Finance, Korn Chatikavanij, cautioned, "If governments continue to stimulate our economies like over the past 12 months, we will run into long-term problems of higher public debt and reduced fiscal space with which to maintain our maneuverability."

Despite the overall upbeat assessment, Credit Suisse Asia Pacific Vice Chairman Jose Isidro Camacho underscored, "There are also challenges, particularly politics. It is an unpredictable factor in ASEAN. Economically I think inflation will be a growing concern as the world recovers."

Much of that recovery has been attributed to China. While panelists agreed that China's economic resilience has benefited the region, Korn noted there are potential problems. "The currency issue. Without a doubt, the situation we have has made us less price competitiveness because of China's policy on the yuan."

On Beijing's currency policy, Camacho commented, "We need stability, not to create a situation that destabilizes what has been the only economic growth engine in the world. From my observation, Chinese policymakers have been taking some steps."

Camacho urged the United States to continue efforts in building Asian prosperity. "Stay engaged in the region. The reason is very simple. Security. A disengaged America could be a concern on the overall security stability of the region."