'The First Thing God Created Was The Pen' 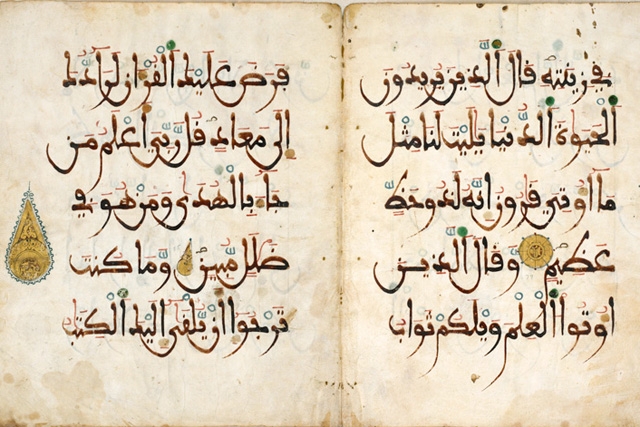 NEW YORK, Oct. 21, 2008 - Members of the Asia Society gathered for the opening of two Asia Society Museum exhibitions of Islamic calligraphy, Traces of the Calligrapher: Islamic Calligraphy in Practice, ca. 1600–1900 and Writing the Word of God: Calligraphy and the Qur’an, organized by the Museum of Fine Arts, Houston, and Harvard Art Museum.

The opening lecture by Mary McWilliams, curator at the Arthur M. Sackler Museum, Harvard Art Museum, illuminated the moral, sensory, and professional dimensions of Islamic calligraphy. In the Islamic world, calligraphy is revered as a medium of infinite duration and a visual expression of faith. McWilliams took a close look at some of the outstanding calligraphic works in the exhibitions to explicate both those meanings and the works' aesthetic beauty.

According to Islamic tradition, “the first thing God created was the pen,” and McWilliams emphasized the role of writing tools, often made of precious and exotic materials, in her talk. Calligraphy, she noted, also creates a sonic experience, as sharpened reed pens move gracefully across paper. And behind all of these aspects is the calligrapher himself, the “pen of God.” The talk examined works by Sultan Mahmud II, the eminent 18th- and 19th-century reformer and calligrapher.

Providing outstanding examples of calligraphy alongside the objects and individuals involved in its making, the lecture introduced the two exhibitions to an audience for whom this was likely to have been a new subject.