'When the Emperor was Divine'... and When Japanese Americans Were Rounded Up | Asia Society Skip to main content

'When the Emperor was Divine'... and When Japanese Americans Were Rounded Up 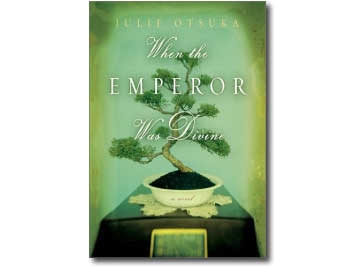 Julie Otsuka’s debut novel When the Emperor was Divine tells the story of a Japanese American family forced to live in an internment camp during World War II. In five concise chapters, Otsuka presents the points of view of each family member creating an intimate and detailed portait of people living through one of America's darkest and most shameful periods: the internment of more than 110,000 Japanese Americans for 3-1/2 years.

Though her story centers around this tragic time in American history, Otsuka's unsentimental style strips characters to their core to create a powerful story of exile and racism that is particularly resonant today. She explains, "I wanted to write a novel about real people... their experience is universal not only for Japanese Americans, but for people of any ethnic group. All throughout history people have been rounded up and sent away into exile. The predicament of the family in my novel—ordinary people caught up in extraordinary circumstances beyond their control—is a very human one."

Julie Otsuka was born and raised in California. She is a graduate of Yale University and received her M.F.A. from Columbia. She lives in New York City. Otsuka is one of the winners of the Sixth Annual Asian American Literary Awards and was honored at the Asia Society on December 8, 2003.

Asia Society spoke with Otsuka about the writing of her novel, her own family's internment, and the relevance of this experience for today's world.

Your family was interned during the war. Can you tell me how this influenced the writing of When the Emperor was Divine?

There was always a lot of silence in my family about the internment—nobody seemed to want to talk about it. The war was something that I, too, tended to avoid in my own work. For years I wrote only comic stories, but as time went on, images of the war began to surface in my writing. So clearly the camps were something I needed to write about. The first chapter of my novel, “Evacuation Order No. 19,” was the first piece of ‘serious’ fiction I’d ever written.

Since 9/11, new regulations for immigrants from Muslim nations as well as other countries have often been compared with the Japanese internment. I just saw a documentary called Lest We Forget that draws very direct parallels between the two American experiences. Do you think that Americans have learned from the injustice of the Japanese internment? Or do you think it could happen again?

I don’t think we’ve learned much from the past at all; it’s as if it never even happened. Even today, when I speak to young people—high school and college-age students— it is striking that some of them know nothing about the internment of the Japanese Americans at all. It’s still not taught in most history classes, or it’s given a brief mention, at most. And I do think it could happen again—I never thought this until Sept. 11. But everything that’s happening now—the targeting of Muslims and Arabs in the US for investigation and interrogation, the government’s ability to label anyone an ‘enemy combatant’ and deprive him of his civil rights–is extremely worrisome.

In this same documentary, there is an interview with the famous Japanese American activist Yuri Kochiyama who talks about her own family's internment. It reminded me so much of your book. You really capture a universal experience for many Japanese Americans. Is this why none of your characters have names?

Yes, but because their experience is universal not only for Japanese Americans, but for people of any ethnic group. All throughout history people have been rounded up and sent away into exile. The predicament of the family in my novel—ordinary people caught up in extraordinary circumstances beyond their control—is a very human one.

You pay great attention to detail in your writing which really makes the reader feel a part of the experience. I know a lot of people have noticed this about your novel and found it to be more powerful than focusing on the broader injustice and victimization of the internment. Did you decide this early on or is this more a result of your style of writing?

I never made a conscious decision to focus on detail. I think that, because of my background as a painter, I’m very concerned with what the world looks like. I have to visualize a scene in my head before I can begin to write it. Also, I wasn’t interested in writing a novel about injustice and victimization, I wanted to write a novel about real people.

When I read the introduction of the mother character I felt like you could be describing any other American woman of that time in the sense that her being Japanese seemed incidental, and this made the subsequent internment of her and her family more powerful for me. Perhaps because I am Asian American this resonated more for me. How much do you identify with being of Japanese heritage?

Very little. Although my father is from Japan, my parents only spoke English at home, and we were taught nothing about Japanese culture. It was only later, when I went to college and began to study Japanese, that I became more interested in my heritage.

Have you been to Japan? If so, what was your experience like?

I went to Japan the summer I was 19 and visited my father’s relatives in the town where he grew up. My father is from a small town in the countryside in the mountains. The experience was wonderful, but very disorienting. I don’t think I’d ever been any place that made me feel so ‘other’ before. Japan and the Japanese were much more foreign than I’d ever imagined. I realized what a long way my father was from ‘home,’ whatever that is.

I also think the numbness of the mother as she packs up the family to leave is very striking. She is very task-driven and when she kills the dog it reinforces this state of mind. Do you sense from your own family's experience that this is something that Japanese Americans would rather forget as a bad memory or do you find that this injustice has created a more politicized Japanese American community?

As for my mother and her family, the internment is definitely something they would rather forget because of the shame and the stigma they felt at having been labeled ‘disloyal.’ I think the desire to forget was quite common among the people who came out of the camps. They wanted to put the past behind them and just get on with their lives. But I do think that, because of what happened, the following generations of Japanese Americans have definitely become more politicized.

Your last chapter is very different from the rest of the novel. Some people might feel it is too abrupt but I found it to be a very powerful ending. Through the whole story the family is dealing with the day-to-day and don't express much anger. But the last chapter feels like a culmination of all the anger that they, as well as Japanese Americans collectively, must have felt. How and why did you decide to write the conclusion this way?

I actually had no idea how I’d end the book. But one day, while I was working on the second-to-last chapter, I ‘heard’ the angry voice of the father. The words came to me very quickly—I scribbled them down and I knew, immediately, that they were the ‘right’ ending for the book. I was surprised that I had such easy access to the father’s anger—I almost felt like I was channeling a voice from beyond. That ending simply came to me—it was a gift.

You mentioned that you were also a painter before you started writing. It sounds like writing became a better fit for you than painting. How did you discover this?

I stopped painting because I became extremely self-critical and overwhelmed by doubt and couldn’t go on. After I stopped painting, I began going to my neighborhood café and reading every day—I didn’t know what else to do with myself, and I found stories terribly consoling. Reading was the only thing that seemed to make me feel better. After reading for a couple of years, I began to think about writing, and signed up for a workshop. I felt I had nothing to lose, since I’d already failed as a painter, so I wasn’t afraid. And in fact, I found that I felt very comfortable with language. It seemed a much easier medium to work with than painting. And I still feel that way.

Who are some of your favorite writers? Are their any Asian or Asian American writers you find inspiring?

Are you working on a new book now?

Yes, I’ve started writing the next one, but feel superstitious about talking about it this early on. Don’t want to jinx it. Silly, I know.