Art and Satire in Iran 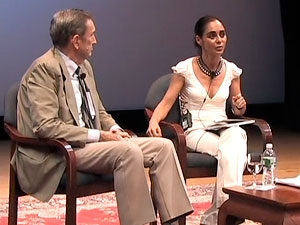 Neshat situated Mohassess's work within Iranian culture for the audience, and briefly described his lifelong preoccupation with oppressors and oppressed. Clark noted the human dignity the artist confers on all his subjects, regardless of his satiric intent. The panel later debated the potential hazards, aesthetic and otherwise, inherent in any artist's venturing into explicitly political or topical material.

Mohassess's illustrations and cartoons have been regularly published in Iranian newspapers and periodicals such as Kayhan, Ettelaat, and Ayandegan, as well as international newspapers such as the New York Times.This legendary artist has been the subject of books and numerous soloand group exhibitions in Iran and abroad. However, the Asia Society's show marks his first major and comprehensive retrospective museum exhibition to date.