Are Young Americans Losing their Competitive Edge in the Global Economy? 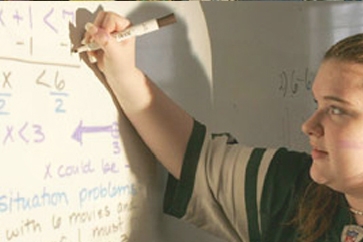 International comparisons are increasingly relevant and important to understand in today’s global environment. No longer do the residents of American cities and states vie only with each other for jobs; their competitors are located in countries around the world. Economists and social scientists agree that, increasingly, the educational abilities of a nation’s workforce will significantly impact its ability to remain economically strong. The students of today and tomorrow must be able to read and write well; they must have strong skills and knowledge of math and science. If they do not, the future well-being of the United States is in jeopardy.

The results of the 2006 Programme for International Student Assessments (PISA) were released on December 4, 2007 by the Organisation for Economic Co-operation and Development (OECD), showing that 15-year-old students in the U.S. continue to perform, in science and mathematics, at levels that demonstrate conclusively that far too many are unprepared for the global economy. In relative terms, the U.S. ranked 25th among the 30 OECD member countries in mathematics, down from 23rd of 29 in the 2003 test, and 21st of 30 in science this year, dropping from 19th in 2003. (OECD notes that the 2006 science scale is not directly comparable with the science scale used in the 2003 test.) That places the 15-year-olds in the United States below the OECD member country average in both subjects, not because students are scoring at lower levels on the tests, but because other countries, including Croatia, Estonia, and Azerbaijan are moving higher.

Seven national organizations co-hosted two briefings, one at the National Press Club in Washington, DC and one at Asia Society in New York on December 4 and 5 with Andreas Schleicher, head of the indicators and analysis division, OECD Directorate for Education and lead author of the report. At the briefings, the 2006 PISA findings were presented in detail with comments and analysis of the implications for U.S. educational policy provided by leaders of the co-hosting organizations:  Bob Wise, president, Alliance for Excellent Education; Vivien Stewart, vice president, education, Asia Society; Susan Traiman, director, education and workforce policy, Business Roundtable; Gaston Caperton, president, College Board; Gene Wilhoit, executive director, Council of Chief State School Officers; Roy Romer, chairman, ED in ’08; and Ray Scheppach, executive director, National Governors Association. More importantly, these events focused on what other countries are doing to improve their systems and rankings, while the United States stays static and what lessons the United States can learn from these higher-performing countries.

The PISA has been given every three years since 2000 to fifteen-year-olds in the thirty member countries of the Organisation for Economic Co-operation and Development (OECD) and in twenty-seven partner countries. Students are tested in reading and in mathematical and scientific literacy to assess whether they have “acquired the knowledge and skills essential in everyday life,” according to the OECD. The 2006 results, which concentrate on students’ scientific literacy, also included math and reading, however, a printing error resulted in a decision not to include U.S. students’ reading results for 2006 in the 2007 report.

For presentation and video from 12/4/07 PISA event in Washington, DC, please visit the Alliance for Excellent Education Website.