An Ancient Art and A New Experience 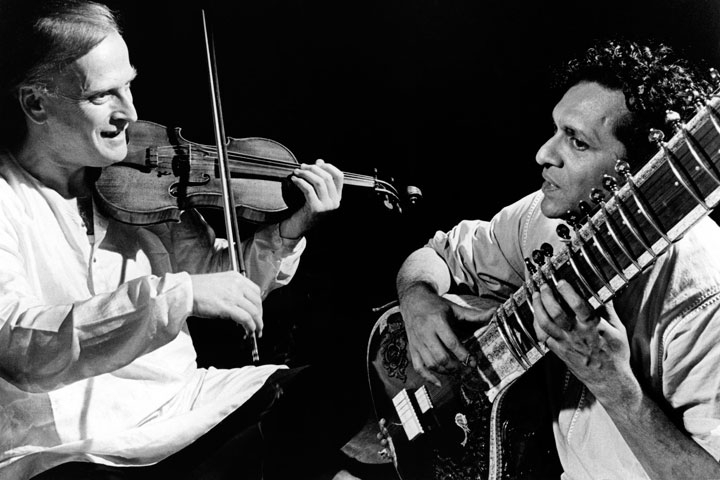 We are honored by the presence in America this season of two of India's leading musicians, Ravi Shankar, who plays the sitar, and Kanai Dutta, who plays the drums or tabla. It was Ravi Shankar who first introduced me to the fascinating, highly evolved, and refined music of India. He is one of the greatest sitar players, and I am indebted to him for some of the most inspiring moments I have ever enjoyed in music.

The sitar is a gourd-style instrument with 19 strings, of which 6 are plucked to provide the melody and 13 are left free to provide resonance. Ravi's instrument was made by N.C. Mullick, who plays the tamboura in our ensemble, the tamboura being the long-necked, four-stringed instrument which, partly bowed and partly plucked, provides the hypnotic drone in the background. The metrical design is carried by the tabla, two drums, one played by the left and one by the right hand. Because American audiences have been accustomed to jazz rhythms for the past three or four decades, the rhythmic element of Indian music will probably be the most immediately accessible over here, and yet the incredible subtlety of Indian rhythms, matching the complex melodic developments, demands careful listening.

Remember that in India this music—like all Indian art—is an offering, born in the temple; and the temple atmosphere pervades even the concert stage. This mood cannot be switched on as a repetitive mechanical process, but must be courted in purification, dedication, and the summoning of hidden, mysterious powers. Thus the Indian musician conjures his music, as it were, out of the void, out of the dimensionless and timeless realm which is the objective of all Hindu philosophical and religious experience.

That is to say, Indian music captures its emotion through improvisation. Each performance begins with the announcement of the scale, or raga, which may be any one of some 700. For while Western music is conceived in terms of only two scales, the major and minor, in which the intervals between the tones are limited to two basic schemes, Indian music, with characteristic Indian thoroughness, is conceived in terms of 700 or more scales, comprising among them virtually every possible combination of tones and moods. Once the chose raga has been announced, then the improvisation—melodic and rhythmic—may proceed, but every note of a given piece must fall within that original framework; not one passage of adornment occurs without the specific magnetic field of those first tones. The only parallel in our music of this strange framework of disjointed sounds is that found in the famous twelve-tone system of Schoenberg, which builds an intricate composition on the unalterable sequence of an established succession of notes. I say "disjointed," because that is the way the raga—or some of them—may sound at first to Western ears, for we are accustomed to the tempered scale which has permitted our composers to develop their endless harmonic structures; but the Indians have traditionally rejected the tempered scale, and have preferred to retain the finesse and accuracy of the harmonically pure interval.

I am convinced if we receded far back enough into history we should find all, or most of the stands of Western music originating in India, for we know that the ancient Greeks employed more than the two modes, or scales, that we use today, and we know that in Greek, Gypsy, and Arabic music today we hear modes not employed in the main Western tradition. This points indisputably towards the raga-system of India. And there are other evidences too, such as the fact that our own Medieval music still rested primarily on the single voice, undeflected by harmonic or chordal concepts and based on the pure interval; more than this, Medieval song relied heavily on vibrato and ornamentation, and the performer was encouraged to embellish the melodic line, as is the Indian musician today. If these evidences are as significant as I believe, then perhaps Western musicians and composers have much to learn from Indian music, and perhaps Western music is at this moment, when the freedom of the twelve-tone method has won ascendancy, particularly ripe for Indian influence, intellectually and aesthetically.

To specify a few points I would like to suggest that Indian influence on Western music might well lead to a number of considerations: 1) to greater flexibility and musical integrity in the tone-row; 2) to melodic freedom and invention; 3) to the peculiar Indian genius for uniting melody and beat, so different from the African genius as developed in American jazz; 4) to the greater complexity of rhythmic organization characteristic of Indian music; and especially 5) to the Indian quality of serenity, the Indian musician's exalted personal expression of union with the infinite, as in infinite love. Few modern composers in the West have achieved this quality, though we revere it in the works of Bach, Mozart, Beethoven. Perhaps we should not admonish our contemporary composers for having lost this sense of serene exaltation, for indeed we have little enough of it in our civilization for them to draw upon; yet what quality is music, the organization of pure sounds, better suited to express? If the Indian musicians who now are so graciously beginning to bring their genius to us, musicians like Mr. Ravi Shankar, can help us to find this quality again, then we shall have much to thank them for.

Yehudi Menuhin was one of the pre-eminent violin players of the twentieth century. His 1967 collaboration with Ravi Shankar, West Meets East, won a Grammy Award for Best Chamber Music Performance.