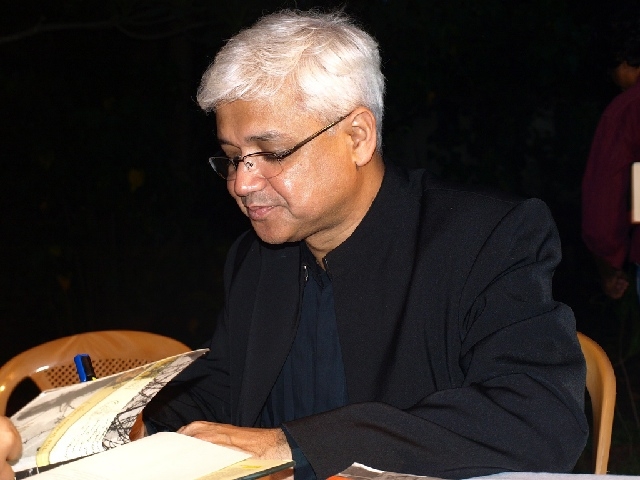 Amitav Ghosh is a popular novelist, journalist, anthropologist and professor whose latest novel, The Glass Palace, addresses the relationship between India and Burma during the British colonial period. Born in Calcutta in 1956, Amitav Ghosh attended school in India and England, conducted fieldwork in Tunisia and Egypt, and currently lives in New York City, where he teaches comparative literature at Queens College. An extremely versatile author, his body of work includes several novels (The Shadow Lines and The Calcutta Chromosone), a collection of essays (Dancing in Cambodia and At Large in Burma) and frequent contributions to The New Yorker.

How does the current political situation in Burma inform this novel? The novel concludes with a scene in front of democratic leader Aung San Suu Kyi's house in contemporary Burma. Why did you choose to end the novel there?

For me, the scene in front of Aung San Suu Kyi's house was both the beginning and the end of the book. The beginning, because I happened to attend one of Aung San Suu Kyi's gateside meetings almost immediately after I arrived in Rangoon, on my first visit to Burma. The meeting made a very powerful impression on me, and my memories of it remain intensely vivid to this day. The end, because it was in a way, the culmination of a long history that I was already familiar with, at second hand.

Your characters seem to float between boundaries of both geography and class. Uma travels effortlessly through Asia, Europe and the US, while Rajkumar, who is born poor, winds up stunningly rich. Would this sort of fluidity have been possible? How fluid were these boundaries in turn of the century British Asia?

To take Uma first-- class was often the key to mobility in the British Empire. Uma was of the class of people who were able to travel relatively easily and her husband's death left her with the financial means to explore the world. In the late 19th century there were many Indian women who went abroad to study, in much the same way that Uma did (the first Indian woman doctor graduated from a British university in the 1880s). The experience of journeying abroad frequently served to radicalize Indians, men and women alike (this is true to this day). Among the Indian women radicals abroad, perhaps the best known is the Parsee nationalist, Mme Bhikaiji Cama (who becomes Uma's mentor in The Glass Palace). Uma's career, as described in The Glass Palace is thus founded on many well-known historical precedents. The same is true of Rajkumar. Rags to riches stories were very common among Indians in Burma. Many of the Indian business magnates of pre-war Rangoon had arrived in that city with little more than a tin suitcase and a few annas in their pockets. Indeed, Burma held a great attraction for ambitious young Indians (and Chinese) precisely because it offered more opportunities than the sub-continent with all its social rigidities.

It is often war that creates a collision between history and individual lives. In circumstances of war, as in such situations as revolution, mass evacuations, forced population movements and so on, nobody has the choice of stepping away from history. The 20th century visited many such calamities on Asia and The Glass Palace attempts to chronicle the impact that these events had on families and individuals. My family's history has undoubtedly played a large part in opening my eyes to these events for my family was divided not only by the Partition of India and Pakistan, but also by the Japanese conquest of Burma in 1942.

How does your background as an historian, journalist, and anthropologist inform your work? Is this entirely a work of fiction?

For me, the value of the novel, as a form, is that it is able to incorporate elements of every aspect of life - history, natural history, rhetoric, politics, beliefs, religion, family, love, sexuality. As I see it the novel is a meta-form that transcends the boundaries that circumscribe other kinds of writing, rendering meaningless the usual workaday distinctions between historian, journalist, anthropologist, etc.

How does photography function in your work? Why is photography such an appropriate symbol with which to discuss colonialism?

My interest in photography goes back a long way. The part that it plays in The Glass Palace is probably attributable to the influence of the late Raghubir Singh who was a very dear friend. He opened my eyes to many of the less obvious aspects of photography.

In The Hindu, Meenakshi Mukherjee calls the novel "the most scathing critique of British colonialism I have ever come across in fiction." Can you comment on this?

If this is true, then it would have to be said, surely, that colonialism has had a pretty easy ride.