Amartya Sen and 'The Idea of Justice' 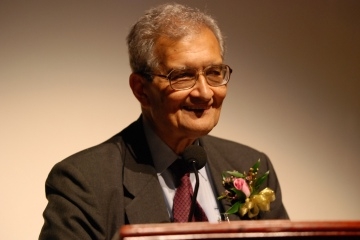 SAN FRANCISCO, February 24, 2010 - "The theory of justice must be more concerned with the elimination of removable injustices rather than defining a perfectly just society," said Nobel Prize-winning economist Dr. Amartya Sen at an event hosted by Asia Society Northern California.

Speaking at the India Community Center to a 300-plus audience, the economist and Harvard professor engaged a wide range of topics, including the concept of justice, ancient and modern political thought, equity in India's affirmative action policy, and the need to recognize the lineage of democracy in countries like Iraq and Afghanistan.

Commenting on the topic "Demand for justice in India," a theme of his latest book The Idea of Justice, Sen pointed out that theorizing about justice often leads to concerns about the prevalence of injustices.

"In India, the prevalence of injustice is at several levels—in the form of widespread malnutrition, lack of affordable health care, and education and gender inequality," he said.

Dealing with a complex issue like justice and its relevance in the practical sense, Sen suggested that one might revert back to the ancient Hindu thought which examines the concept of Niti and Nyaya. Niti in Sanskrit legal thinking deals with just rules and institutions, while Nyaya is about their realization. Niti is an abstract exercise that, if implemented completely, would result in maximum public welfare and justice. Nyaya, on the other hand, relates to the enforcement of laws and regulations.

Addressing the issue of affirmative action in India, Sen explained that Niti drives the policy, whereas it should be a Nyaya-based approach. He noted that there is only so much one can achieve by affirmative action.

He also noted that often religion-based affirmative action policies can have unintended negative consequences for the poor of certain faiths.

"It is a miscarriage of the intention of affirmative action if low-caste, poor Hindus are favored more than Muslims who belong to the corresponding social strata and are often not entitled on grounds of not being a Hindu," he said.

Responding to a question from the audience about India's Maoist insurgents and their increasing use of violence, Sen pointed out that the problem is most severe in eastern states of India, where the movement is becoming particularly strong. These states are dominated by their tribal populations and also sidelined by the country's development agenda.

"Neglect of tribals is a huge spot on India's pursuit of justice. I very much rebel against the view saying we ought to do something about it otherwise they would join the Naxalites. The reason we should do something about them is precisely because it's matter of justice," Sen said.

He added that the issue with such extremist movements—including fundamentalist religious groups like Hindutva Islamic groups—is that each of groups has a clear vision of what society would look like in the future according to their goals.

"Unfortunately, that vision of future has gradually been replaced to a great extent by kind of glorification of violence as a shining path, and I think that ultimately gives us a reason for being critical of their position," said Sen.

In his concluding remarks Sen said, "My job as an economist has been about identifying injustice, and I am concerned with developing human freedom and capabilities as tools, and not just relying on institutions."