After the Tsunami | Asia Society Skip to main content 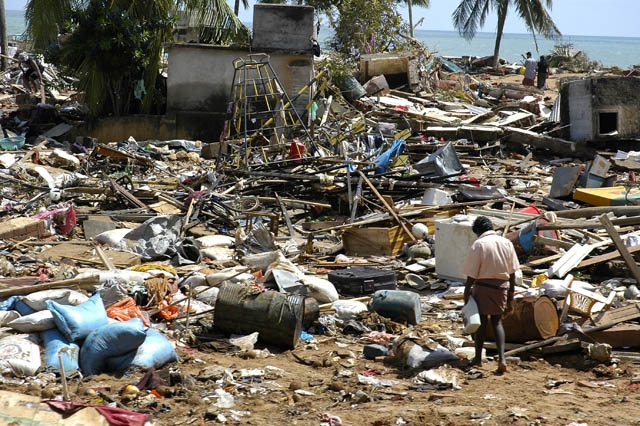 The mighty tsunami waves that devastated parts of Asia in December have had a major ripple effect on political difficulties in the region. In Sri Lanka, the tsunami has forced conflicting parties closer at the peace table. But in the Aceh province of Indonesia, it has complicated matters and led to worries of further corruption. In a briefing by two close observers of these countries, Asia Society provided a more complex view of the nations that are struggling to survive this freak natural event as part of its Tsunami Relief Program, highlighting the long-term implications for the tsunami-wrecked region.

In Sri Lanka, the tsunami has had a short-term bonding effect between the government and the Liberation Tigers of Tamil Eelam (LTTE), the guerilla fighters made up of disaffected farmers and poor urban youth, strengthening the cease-fire situation.

The waves were indiscriminate in their fury, killing roughly equal numbers on all sides of the conflict. To escalate violence after the disaster would not be of strategic value, thereby taking that threat off the negotiating table. The physical, "neutral" damage to both sides creates a shared objective, intensified by international donor pressure to get along. There is a sense of cooperation uniting them in reconstruction planning, although as planning enters the difficult reconstruction and development phase, which involves control of money and degrees of power, the spirit of cooperation is not as great.

The government must trust the LTTE to fairly reconstruct in its area, but whether it gives the Tigers the authority and money will be a political call made at the time. The Tigers have achieved some international status due to the tsunami and its reconstruction, he added. Once only a terrorist group, they have benefited by association with the international relief effort and won't want to throw that political capital away by being obstructionist in relief and reconstruction.

The situation on the ground in Aceh, the Indonesian region worst hit by the tsunami, is very different. Aceh is still under martial law and security is an issue. Many Aceh residents did not know the huge extent of their situation until the third day after the disaster, when the government permitted reporting by foreign journalists. A state of civil emergency still exists and reconstruction cannot start until the fighting stops, but the political climate has changed for the better. Last week, as has been reported, both sides agreed on the issue of Aceh self-government. Furthermore, civil society's role in political dialogues has strengthened as a result of the disaster. IFA has helped organize conflict resolution and organizational development workshops in Aceh along with other groups. Left unclear was whether the blueprint for reconstruction adequately reflects the actual needs and participation of the Aceh people.

The moderator left the majority of time for audience questions, many of which reflected the large number of non-profit organizations in attendance. Questions raised about the state of housing in the areas revealed that the homeless tsunami victims are sometimes getting quicker government attention than those Sri Lankan and Acehans displaced by conflict, which is a tougher issue to tackle. Furthermore, given new safety regulations, governments will be forced to buy land away from the water in many cases to rehouse tsunami survivors. While the Sri Lanka situation is still confusing, and while housing seems the only component now in the country's revitalization project, other needs, such as for schools, a new curriculum and a general revitalization of the area, will continue to be addressed. But more thinking about it is needed.

Some questioned whether NGOs and/or the governments are taking the steps needed to be more transparent given the flood of donor money. One commenter mentioned that it was an important issue and that the US government should impose stricter transparency policies on the Indonesian government, given past charges of corruption and nepotism. While in contrast, another said local Sri Lankan NGOs, unaccustomed to dealing with such vast sums of money, are the challenge.