Aceh's Governor on the Peace Process in Indonesia

Irwandi Yusuf talks about Aceh's position in the federation 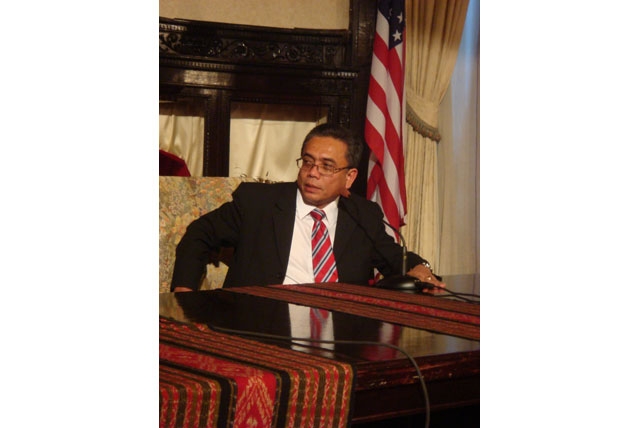 Irwandi Yusuf is the Governor of Aceh. A former separatist leader, Governor Yusuf has held several positions with the Free Aceh Movement (GAM). He was formally installed as Aceh's first democratically elected governor on February 8, 2007.

In this interview, he talks about the transition he made from leading a movement for national liberation to serving in government. Governor Yusuf is hopeful that Aceh will be able to attract more foreign investment and will receive a fair share of revenues for its resources from the central government in Java as stipulated in the Helsinki agreement.

Governor Yusuf, you spent many years working with GAM, the Free Aceh Movement. Could you explain how you made the transition from being part of a movement for national liberation to serving the government?

Well, this is quite a difficult question, very complex. Aceh was a sovereign state, a sovereign country before the invasion of the Dutch in 1873, which resulted in a protracted war for many, many years resulting in many killings, but not surrendering of the Acehnese. The Japanese came to Aceh, and drove away the Dutch, and then the Japanese, as you know, were defeated in World War II, in the Pacific War, and then Indonesia declared its independence. Without the consent of the Acehnese people, all of a sudden Aceh became part of Indonesia, and the people protested by launching the rebellion in Aceh in 1953, led by an ulama.

Then the government agreed to grant special autonomy to Aceh, but never implemented the law. Later on, in 1976, a new generation of Acehnese people formed the Free Aceh Movement (GAM). And this time, we struggled for independence (in 1953 we had settled for some sort of greater autonomy; now we wanted independence).

At first the Free Aceh Movement didn't use arms to achieve its goals, but instead launched an awareness program to the people of Aceh. The people of Aceh were expected to understand who they are. But the Indonesian government responded by sending the military to crush this movement, and many of its founders were imprisoned or killed, and the rest fled overseas. We were aware that the struggle needed a back bone. What back bone? Armed force. We trained our people abroad for the armed forces, to protect ourselves, and to protect the movement. In 1990 all the trainees had completed the program and returned to Aceh, and the government again responded heavily, and we lost many people, and the survivors fled again overseas, mainly to Malaysia.

In 1998, with the end of Suharto and the formation of a more democratic government in Indonesia, our remaining forces from Malaysia and elsewhere in the world came back to Aceh, reconciled and united. Then we launched the awareness program throughout Aceh and gained a lot of support from the people all over Aceh. Then bit by bit we established an armed force to protect this struggle and the people of Aceh. Of course the government also reacted militarily in 2003. But before 2003 there was a peace deal mediated by the Henry Dunant Centre from Geneva. We called it a cessation of hostilities; actually, not a cessation, but a "humanitarian pause".

From 1998 I was heavily involved, and actually the first headquarters of GAM, administratively, was in my home. Later on, in 2001, I infiltrated ICRC [International Committee of the Red Cross]. I was working for the ICRC to learn humanitarian law. And three months later I left the ICRC after getting enough training in law, and then I went up to the hills to teach the GAM soldiers humanitarian law. In 2003, after the failure of the Tokyo talks, the government launched a massive military attack on the GAM position, and we withstood the raid for more than two years, and then the tsunami happened. The tsunami actually sped up the peace process in Aceh. Why do I say sped up? Because before the tsunami the government already approached us for negotiations.

What are relations like now though between the Indonesian military and your government in Aceh?

Well, as a result of the MoU in 2005, the military's role is only for external defense. While before-

Yes, Indonesian military. The GAM military has been dissolved, and we decommissioned all of our weapons.

How many are there now in Aceh, Indonesian military?

What were the key points in the Helsinki Agreement, and what have its consequences been in terms of changes in civil and political life in Aceh?

So that number was actually outlined in the Helsinki Agreement, that 14,700 would remain?

Yes. And in the political, the government agreed to provide venues for local elections, not only involving candidates from a political party, but also independents, with no political party. I am one of the independent candidates. And also the sharing of power, Indonesia agrees only to hold six authorities: external defense, national security, monetary and fiscal, justice, religious issues, and foreign affairs. And later on they added one more: all national interests. This is a very, very obscure stipulation.

Are you concerned, given how resource rich Aceh is, about the revenue sharing agreement that exists now between the Acehnese government and the central government in Java?

Yes, the oil and gas is almost finished in Aceh, but now we're getting 70 percent of the net profit.

Is that according to the Helsinki Agreement?

Yes, according to Helsinki, but we don't know from what that 70 percent comes because it's never openly audited.

So who's responsible for that? Is it the central government?

And the central government maintains control over the revenues?

I see. So, how do you think that Aceh, or rather let me say when, given this, when do you think Aceh will be able to attract investment in the resources it has, and actually gain the benefits of the resources that belong to Aceh?

When? Now. Why? Because we have now the law, authority of law, that Aceh can control its own affairs. But this year is a transition year. The government is providing the bylaws, and also in Aceh we are creating bylaws to implement the law number eleven. The law number eleven is the law derived form the MoU, although not fully one hundred percent complying to the MoU. But that's a better law than nothing.

What are the sectors in which you hope to attract the most investment in Aceh?

Agro-businesses, because most of our people base their job on agriculture.

Has there been an increase in investment since you've been-

I have signed many MoUs with overseas investors, now they are dealing with the financial institutions to get money, and to invest in Aceh.

And what are your main priorities as governor in the first year?

Of course I want to make the government right. I inherited a wrong government from the past regime.

In every sense, the corruption and the power abuse. I'm correcting it now. And at the same time, launching the grassroots economy by providing access to the grassroots community-

What would the grassroots economy be?

Well, whatever grassroots people can do, whatever their background is, they should be able to do. So they do not have access to finances, to capital, so I provide the capital to the bank, soft loans. The problem with grassroots people is when they deal with the bank, they do not have collateral, so I instruct the government of Aceh bank there to issue credit without collateral.

What do you see as the main obstacles to Aceh's growth in the next decade or so?

Well, again, the economy. This small grassroots economy won't create a big and modern Aceh. We need, later on, investment. And we have potential to offer: mining and agriculture.

But you're optimistic about the extent to which Aceh will actually benefit from the resources it has?

Oh yes. It has now been two years already, and my ex-combatants are waiting. I want the central government in Java, the government of Indonesia, to be fully committed to the MoU and the law number eleven. Also, there are other commitments to be fulfilled by the central government on human rights issues: the courts, the trial of human rights abusers, truth and reconciliation, and also the Joint Claims Settlement Commission.

And these are all to deal with victims of the Indonesian military's operations in Aceh?

And the Indonesian military has agreed to comply ? In the Helsinki agreement this was-

For the human rights? Well, they're very elusive.

So there was an agreement in Helsinki that there is going to be a human rights court for Aceh, but no stipulation that past abuses will be tried in this court. And then the Indonesian government is very smart, because law number eleven was created in Jakarta, by the parliament in Jakarta, so they shaped it a bit, the human rights court for future violations -- give me a break!